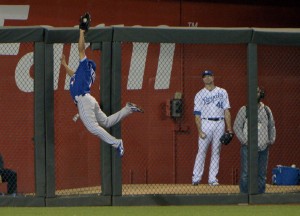 As most of my dedicated readers will know, I’m in a period of mourning over the defeat of my beloved St. Louis Cardinals in the playoffs this year. In an attempt to forget my sorrow for a short time, I walked to a local pub to imbibe a Beefeater and Tonic, enjoy the company of some intelligent and attractive women, and watch the sixth game of the Kansas City Royal v. Toronto Blue Jays playoffs.

And what a game it was.

As I watched scintillating defense, prodigious hitting, superb pitching, daring base running, and essentially, sport at its finest, I found myself imagining a world in which merit was always rewarded. A world where the people who gained promotion were those whose performance earned it. A world where elected officials were those most dedicated to their nation and only wanted the best for it.

There may be no crying in baseball but more importantly there is little room for incompetence. I do no pretend that sport is a perfect meritocracy. There will always be aging veterans and high priced rookies who are given more opportunities than they probably deserve. That being said, there is a limit to failure in sport. A pitcher who can’t get a batter out will soon be dismissed whereas a politician who fails to make the country a better place might well continue on eternally in a gerrymandered district.

At this time only 90 of the 435 House of Representative districts in the United States are considered competitive.

What do we get in the absence of competition? The answer is obvious. Mediocrity and worse, incompetence. People on both sides of the political divide agree that competition is good. The Royals and Blue Jays prove as much. Yet both side gerrymander their districts into noncompetitive elections in order to “win”. And therein lies the problem.

If the Royals promoted players not because of their skill, dedication, hard work, and determination but upon who management wanted to succeed, the Royals would finish in last place every year. Sport is a hard crucible. You do not succeed with incompetence in sport and your failure is quickly and painfully manifested. Fans demand change and they demand it right now.

Politics? Not so much.

And we wonder what’s wrong with this country.

Vote well or your nation will finish in last place.