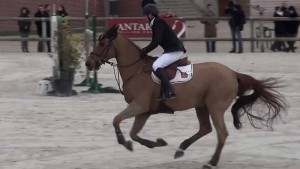 A prize Show Jumping horse was recently killed, dismembered, and it’s meat taken from a rural farm in Florida and it’s the United States Government’s fault.

This will my third blog on this topic. I wrote in May of 2013 about why horses were essentially being tortured. I followed up with a blog in June of 2013 about how this came to be.

This new story about Phedras de Blondel again shows how governing beyond the Constitution causes many unintended consequences. That horse is dead today because of the United States government. That’s the long and short of it.

What happened is that Senators and Representatives of the United States government allowed themselves to be swayed largely by T. Boone Pickens who apparently loves horses and is bothered that other people like to eat them. People in the United States are largely against slaughtering horses for consumption although other nations largely do not have such misgivings on the subject. Congress attempted to pass laws banning the slaughter of horses but failed to get them signed into law.

Thus failing they resorted to other methods. They included no funding for USDA inspection of horse slaughtering facilities. By law all such facilities must be inspected. No money for inspections means they can’t legally sell the meat. The existing packing plants immediately offered to pay the USDA themselves for such inspections but the courts ruled this illegal.

Naturally the export of horses for slaughter to Mexico and Canada increased dramatically and, of course, the fact that there are many more horses nobody wants leads to abuse. This includes up to 50,000 horses who are currently living in pens in the western states in what can only be called a horrific existence.

Yes, most people don’t eat horses in the United States but clearly some people do. A group of people killed Phedras de Blondel for his meat. Meat but for the government’s actions they could have easily purchased instead.

There’s a lesson in here for those that want to listen.