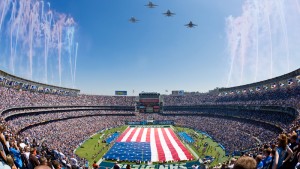 As anyone who reads my blog on a regular basis knows; I’m from St. Louis and a huge sports fan. In the last few years I’ve noted a hefty increase in the amount of time spent honoring military veterans during the games. At every Blues, Rams, and Cardinals they take time to honor a soldier in the stands and run some tributes on the video screens.

It turns out that, in at least some of those cases, the military is paying the team to run the tribute. They consider it advertising and money well spent. I can’t tell you if that’s the case for my hometown teams, the article only mentions the contract between the National Guard and the New York Jets, but I did want to examine the idea of my tax dollars going to sports teams in order to honor veterans.

The first thing that comes to my mind is that when the Cardinals, Rams, and Blues give up time during the game to talk about a veteran they are potentially suffering a financial loss. That time would have otherwise gone to paying advertisers. The second thing I think about is that it’s quite good advertising. Young men and women at the game are probably inspired by the tribute and want to join the military because of it.

The military spends plenty of money on advertising outside of sporting events so it shouldn’t come as a huge shock that they are behind the tributes, at least financially.

I think the problem comes from the fact that there is a general impression that such tributes are done out of respect for the military and our veterans, not because they are paid advertisements. The reality is that on the whole these days sporting events are largely just giant paid advertisements. Anyone who’s gone to a game in the last ten years has seen every open surface of the stadium splattered by ads and had their eardrums assaulted during every break in the action by advertisements.

I suspect most people thought the teams were doing the military tributes out of the goodness of their hearts and the various leagues certainly did not do anything to dissuade us fans from such notions. That would certainly describe my understanding of events prior to reading the article.

That being said, I don’t have a problem with it. It’s capitalism in action. The team gets good will for doing it while the various military branches get return on their advertising investment.

What do you think? Are you upset and angry that such tributes are merely paid advertising? Do you feel deceived? Or are you more like me and accept events for what they are?

3 thoughts on “Paying the NFL for Military Tributes”