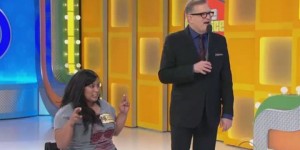 There’s an interesting little news story making the rounds about an episode of the game show The Price is Right where a double-leg amputee won a treadmill as part of her prize package. Apparently some people were upset by this although, judging by the comments, the majority of people don’t have a problem with it.

The game show issued a perfectly satisfactory explanation and I’m not sure I need to elaborate much upon it but I did want to discuss the idea that some people found the episode uncomfortable and consider their point of view, or at least the rationale behind it.

The prize, of course, was determined long before the contestant was chosen. There is no way the show can match every prize to every contestant. I would imagine many of the contestants simply sell their prizes in order to pay for the taxes on the earnings so it’s rather pointless to worry about what the prize is to begin with.

Do people get upset when a man wins a product generally designed for a woman or vice versa? What was it about this particular episode that got people thinking?

It’s my opinion that people generally want to be good, they want to be helpful. It makes us feel better about ourselves when we do something nice. The idea here is that people came to an erroneous conclusion, Perez was in need of help or sympathy. She wasn’t. She’s just fine the way she is and happy with the prizes.

I don’t think it’s a bad thing to want to be nice to people and to help those suffering from real harm. That attitude is one of the good parts about being a human being. But it becomes a bad thing when we try to help people who don’t need it for the sole purpose of making ourselves feel better.  It’s quite clear that Perez didn’t need anyone to help her. People are trying to do so largely because it makes them feel better about themselves.

This is a difficult thing to fully grasp. We want to be good people and do good things and thus we seek out ways to affirm our goodness. In this era of instant communication people use Twitter and other social media platforms to show the world how wonderful they truly are. They stick up for the downtrodden by spending a few seconds writing a Tweet and Liking a post but they aren’t really a good person for doing it.

It’s not easy to examine our motivations deeply but I think the world would be a better place if we did. The next time you want to help somebody, take a moment to examine if that person actually need any help. Examine your motivation.