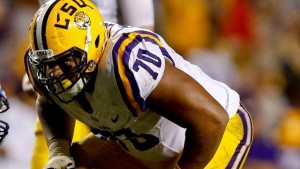 The National Football League just held their annual draft and a particularly unfortunate series of events led to a young man named La’el Collins remaining undrafted despite the fact that he was considered a First Round talent. It illustrates an interesting reality of this world in which we live.

This was enough for every team in the NFL to pass on Collins through all seven rounds of the draft. If Collins was not being questioned in this case it is most likely he would have been taken as one of the top ten picks in the draft. The NFL uses a system whereby the position you are drafted in determines your rookie contract to some degree. If he had been drafted in the tenth slot Collins would likely have gotten a contract worth about $12 million. As an undrafted free agent he stands to earn about $500,000 per season for his first three seasons.

The difference is clearly enormous.

NFL teams are under no obligation to draft anyone. Because Collins is involved in an extremely serious legal situation, each team chose not to draft him. Collins asked the NFL to allow him to enter what is called the Supplemental Draft at a later time after he had time to clear up the current issues. The NFL refused. Collins said that he would refuse to sign with a team that drafted him after the third round and wants to enter the draft next season, this is currently not allowed by NFL rules.

What does all this teach us? That life isn’t fair.

The police stated pretty clearly they do not consider Collins a suspect in the murder but with the recent events in the NFL regarding Aaron Hernandez the teams in the league were immediately wary.

There are a lot of losers here. Mills is dead, Collins is out a lot of money; his reputation is forever sullied, and the NFL team that would have drafted Collins won’t have his services.

Was there a better way? Could the police have waited until after the draft to announce they planned to question Collins? I’m not sure. It’s a murder investigation and I’m sure the family of Mills wants the police to move with all haste. It’s possible Collins is involved in the murder and the teams were right to avoid drafting him.

Hopefully the police will find the murderer and Collins will have nothing to do with it. Collins will sign as an undrafted free agent and perform remarkably on the field and get a huge contract in three years.

Still, it does make me wonder about the nature of the world. It’s quite possible Collins did nothing wrong and is being significantly punished for it.

Sometimes there are no easy answers, or answers at all.