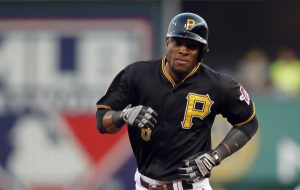 Pittsburgh Pirate outfielder and burgeoning star Starling Marte was suspended for eighty games by Major League Baseball. As a result, we see the typical laments that always come with such revelations.

The crowd screams about what an awful human being and cheater is Marte. They fill comment posts with remarks about how he should be banned for life from baseball and how he betrayed his teammates. I’ve said it before and I’ll say it again, masking techniques are far ahead of detection methods. The vast majority of athletes are using performance enhancing drugs. This issue does not just encompass professional sports. There is every chance the high school track and field event you’re watching is being dominated by athletes using PEDs.

Cyclists have tiny motors embedded in their bikes. It is highly probably all sorts of cheating in this regard is going on that we don’t know about. Perhaps a device in a hockey goalie’s glove that tracks the moving puck and moves a few millimeters to catch it. The possibilities are as limitless as the human imagination and technology allows.

There are certainly operatives in the stands watching opponents and passing information along to allies on the bench with communication devices. Is equally undeniable that some organizations are using electronic devices to spy on opponents in the locker room as they make strategic decisions.

I’ll be honest, I suspect there is cheating going on at a grade school level with the full approval of parents and coaches. There is so much money available in professional sports it’s inconceivable to me that people are not doing so.

The advantages to be gained are both subtle and lucrative. A young athlete might gain a scholarship to a top prep school instead of a competitor. Another athlete might get a college scholarship. Perhaps another might make the major-league roster of a team rather than be mired in the minors. A coach might get a long-term contract because of a few extra wins a season based on information gleaned from a small listening device on an opponent’s bench.

At every level, there are rewards to be had for athletes and coaches who take advantage of methods we consider cheating. To live in a fantasy world where only the other team use these means, is a life of delusion.

More importantly, the methods to gain advantage whether it be PEDs, electronic surveillance, or mechanical aids, are not going away, they are multiplying. It is easier and easier to cheat and more and more difficult to catch someone using these techniques.

The final question is simply if anything can be done about it? The answer is basically no. Certainly we can take precautions. We can install anti-surveillance devices, we can test athletes for PEDs, we can use devices to look for suspicious equipment, we can apply spotters looking for spies. All these methods are quite reasonable. The reality is, cheating is here and no matter our efforts to thwart it, it will stay.

The cheaters will prosper. Those who don’t will languish. That’s an unpleasant truth.