The Airline Industry in the United States was largely brought into existence and continues to be propped up by your tax dollars. It now looks like another $54 billion is going to be spent to keep it going. Yikes. Why are we propping up an industry that has largely failed to be profitable since its inception?

To fully understand how much of your tax dollars have gone into the airline industry we have to go back to the beginning. The Contract Air Mail Act of 1925 essentially allowed airlines to exist and they would not have turned a profit if not for government contracts. Since then the airline industry has continued to be largely dependent on the government for survival.

Without government contracts, military and government passengers paid for by you, employees trained at taxpayer expense, military breakthroughs in aviation, funding for research, the Essential Air Service, propping the industry up after the 9-11 terrorist attacks, ongoing payments to maintain staff and service airports, the industry would not exist in its current form.

In addition, the result of all these tax dollars put into the airline industry by the government was the utter destruction of the profitable and highly used passenger rail system that largely no longer exists in the United States but is functioning with great success in almost every other country in the world.

So, now, after all this, we are being asked to once again save the airline industry from bankruptcy. Hey, how about we let the unprofitable airlines fail, allow autonomous cars to transport us relatively short distances on our own schedule, and rebuild the passenger rail system without tax dollars? Those airlines that can run profitably without taxpayer dollars will do so.

Your tax dollars are the only reason many small airports across the country exist. That’s what the Essential Air Service act ensures. The government keeps small airports open even though they have no hope of ever being financially independent.

We never should have used tax payer dollars and government mandates to create the airline industry and now, all these years later, we’re continuing to pay for that mistake. Let’s put a stop to it, now is the opportunity to do so.

The mantra of a Libertarian: Let them fail. 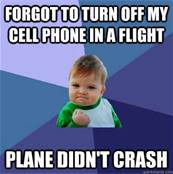