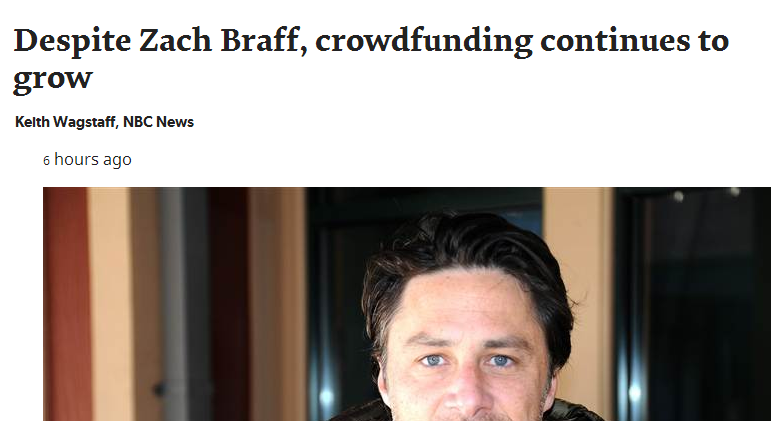 Zach Braff tried to destroy crowdfunding, at least that’s what the headline seems to proclaim.

The article goes on to explain how Braff’s crowdfunding movie project, Wish I Was Here, brought a whole new level of interest to the idea of crowdfunding which is exactly the opposite of what the headline suggests.

For those of you who are not familiar with the idea of crowdfunding I’ll explain. The concept is that you start a project and anyone donates money towards it in exchange for future rewards dependent on the level of money given. For a movie perhaps you would get entrance to the screening and attend an after-party with Braff.

As I read the comments below the story there was a distinctly negative tone to them. People were angry that the wealthy, like Braff, were asking regular people for money to fund projects. The comments were filled with angry people suggesting that anyone donating money was a fool.

I shook my head, why this animosity, why the anger? Time to put on my Critical Thinking cap. Who would be against crowdfunding?

A quick perusal of the Wiki article brings immediate clarity to the subject. Bankers. Legislation is already signed and regulation is on the way. I expect a veritable flotilla of articles and politicians trying to convince us how dangerous is crowdfunding and how it must be regulated. All for our own protection, of course.

Let’s imagine for a moment a community needs a road repaired. In the past the government would contract out to do this using bonds. Perhaps a business needs to make a capital improvement and they raise money by borrowing it from a bank. The money is returned with interest.

In a crowdfunding situation who is left out of the equation? Banks.

I contribute to a cause of my choosing directly. I’m aware of exactly what my “interest” payment will be. Perhaps I fund a Kickstarter campaign for a Pathfinder Compatible Role-Playing Game called Throne of Night. I give $150 dollars and, if it is completed, get all the books in the campaign signed by the authors.

Naturally there is a risk. The books might not be finished; although there are then legal remedies to get my money back. Crowdfunding is considered a legal contract.

Crowdfunding appeals directly to my Libertarian ideology. If a community cannot raise the funds for a road improvement then perhaps the improvement was not needed.

The idea is certainly appealing to people as more and more projects are funded this way. Imagine a world where projects that are the most worthwhile to people are the ones that get financial backing. Wasteful projects that appeal to a very few cannot get funded. You loan directly to friends; you take out loans not from banks but from a group of people who believe in you. Tax dollars not needed because projects were funded directly by the willing.

Is there danger? Certainly. Is it possible that a hugely valuable project isn’t appealing to the masses and doesn’t get completed? Yes. Can you lose your investment to shady operators? Absolutely. Are your neighbors going to crowdfund your gutter replacement, probably not.

I’m certainly not suggesting that crowdfunding can pay for all capital expenses but each project funded by people is one less funded by banks. That’s money out of someone’s pocket.

I expect to see a big push to vilify crowdfunding. It’s a danger to a certain group of people. People who have a lot of money and a lot of power in politics.

Where do you stand?