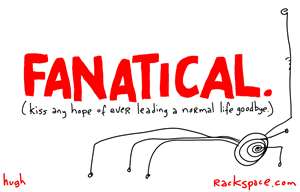 Is there is a correlation between people who raise relatively normal fanaticism to an extreme and violent level and potential brain injury? I’m not totally conversant with the subject and perhaps some of my friends will chime in to critique my analysis tomorrow. My goal is to look at some of the murderous maniacs in history and compare them to the mindset of terrorists today.

Is murderous fanaticism actually a brain malfunction rather than a learned behavior? Perhaps it is a tragic combination of the two. Come back tomorrow and you’ll get to explore the topic with me.

Today I want to talk about how people become fanatical.

I do want to make it clear that I’m not talking about a light-hearted fanatic behavior. Perhaps someone is “fanatical” about a particular sports team or clothing designer. This use of the term has roots in aberrant fanatical behavior but there is an important distinction.

Someone who is passionate about a particular team or food or author is not to the point of killing someone who likes another team or food or author. Although, sports fanaticism can rise to the level of violence. I want to be clear that liking something passionately does not meet the criteria of fanaticism that I’m talking about here. Also, to be very clear, I’m not talking about religious people. It’s more than possible to be deeply religious and not be fanatical. Fanatics transcend the sport, religion, or other thing to which they profess their fanatic love. They are violent, they are unthinkingly loyal, they are certain that those who oppose them mean to destroy their way of life.

Finally, I also want to state that people who rise to violent fanaticism are not forced into it by any of the things I describe below. They, and they alone, are responsible for their actions. I think people who commit actions like this have brain damage of some kind. I just think, as I’ll talk about, that an environment that emboldens such maniacs can be limited through our own behavior and educational methods.

We see fanaticism currently in Anders Breivik who argues that his murder of seventy-seven children was self-defense because they represented a threat to his way of life.

This pathology shows us the means and methods of becoming a fanatic.

A fanatic is convinced that they must act to preserve their way of life. The way to achieve this conviction is to simply stop thinking about the possibility that you could be wrong. This is the very definition of Faith Based Thinking. I believe it is true and therefore it is. Without this, there is no fanaticism. So, how is that people can be convinced they need not look at evidence that doesn’t support their theory of the world?

Again, I don’t want to seem to be picking on religion in this post because, for once, I’m not. Fanatics transcend the religion they often, but not always, use to fuel their fury. They latch onto something and that something is often religion but it doesn’t make religion the villain. It comes from a mindset that looks at things in a very black and white fashion. I’m right, you’re wrong. There is no reason to consider your point of view, your feelings, your right to live.

So, how do we get people who think like this? How do we end up with fanatics who were “such nice, quiet boys” just a few weeks ago. Who are loving family members, good friends, contributors to society? People who “we could never imagine would do such a terrible thing?”

The talking heads on media are trying for ratings but are actually laying the foundation of fanaticism when they shout down and ridicule those with different opinions.

Again, don’t get me wrong. Even with encouragement most people don’t turn into fanatics. Most people maintain their critical thinking skills well enough to know not to kill a bunch of other people. But, the more we teach people to laugh at, ridicule, attack, and belittle those of opposing points of view the more we are fueling fanatics. Words like Repukicans, Libtards are vicious attacks against those we disagree with. You mean them as harmless verbal jousting but there are people out there who don’t see it that way.

Next time someone espouses a position you disagree with try asking them this question: “What facts do you have to support that position?” And, here’s the crazy part, listen to their answer and think about it. Even if they don’t convince you at least you’re setting an example for those around you and I think we all know how important it is have good role-models.

The guy sitting next to you when you launch into a diatribe about how President Bush/Obama is destroying America might not be as rational as you imagine. They might not be a “nice, quiet guy”. They might find fear in your words. Fear of losing their way of life. This fear might embolden them to act.

So, I say stand up for critical thinking. Listen to the other side. Be a shining example to your family and friends. If everyone did that I suspect the world would be a better place and isn’t that the goal of any rational person?