The second Presidential Debate is going on about now, or so I’d guess. I’m not watching. My guy wasn’t invited … again.

As of this moment Gary Johnson will not become President of the United States. Libertarian candidates in general will not win many elections for Senator, Governor, Congressman, or much of anything else at a national or state level.

The world is approaching a crisis and a great man once told a nation that the only thing they had to fear was fear itself. The closer we get to this crisis the more fear paralyzes us into inaction.

Are you willing to sacrifice your freedom for the illusion of safety?

Are you afraid of “throwing your vote away”?

Are you absolutely certain you’re right? Are you sure the other guy is wrong? Do you skip listening and reading other points of view?

If so, then we don’t want you now, but we hope you’ll give up on fear and join us.

If you are afraid; then you should feel right at home in the United States of America, the land where fear mongering wins elections and reasonable compromise is forgotten.

We can change everything. Every election we get that opportunity. We might not make change this time, or next time, but we’re here, and we’re not giving up. 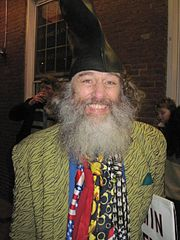 I’ve noticed I’m still getting some hits on this story but fewer on my follow-up apology. For those who read this make sure to note the comments. I made a major mistake here and an alert reader spotted it for me. The link to my apology is below. Thanks!

Congressman Paul Ryan, you disgust me. I’ll post the quote from this story.

For those of us who would have voted in the primaries for, say, Ron Paul, why should we vote for you and not, say, libertarians or Vermin Supreme and the Pony Party or something like that?

Paul Ryan thinks Libertarians like myself, people who respect the integrity of Congressman Paul, are comparable to people who think this man should be president.

Die Congressman Ryan. Seriously. Die and make this country a better place. Hang your head in shame. You miserable excuse for a human. How dare you? How dare you!

In your disgusting desperation to win an election you stoop to claiming I think the United States of America is a joke? That elections are fun and games? That voting for Gary Johnson is equivalent to voting for a gag candidate? You know nothing of Libertarianism, of real conservatism. Nothing!

I will never vote for you. Never! I hope no one votes for a disgusting piece of garbage like you. I hope you lose your seat in Congress. I hope your cronies refuse to give you a million dollar a year job after you lose the election.

If you want to know why I’m a Libertarian Congressman Ryan, look in the mirror.

You think I care if Obama wins compared to Romney? You’re a fool. I vote for Gary Johnson not to prevent Romney from winning but because I love my country. Would that everyone felt the same.

Tom Liberman
Sword and Sorcery fantasy with a Libertarian Twist
Current Release: The Hammer of Fire
New Release: The Sword of Water