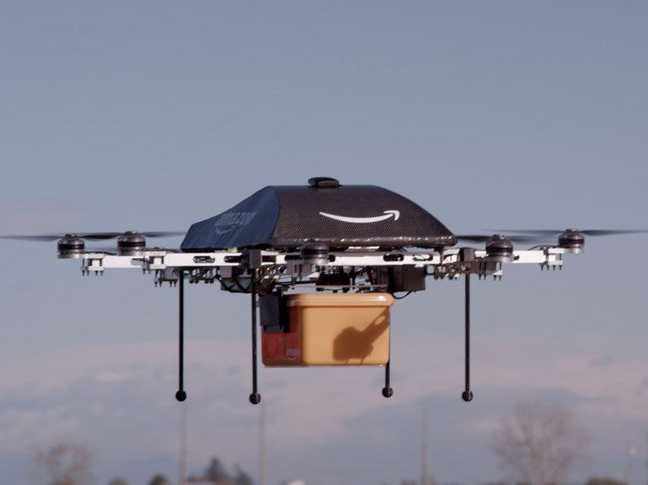 The news story that is catching everyone’s eye this week is from an episodes of 60 Minutes where Amazon owner Jeff Bezos declared that the company is contemplating using drones to deliver packages to customers.

This idea is frightening to a number of people as explained by this article.

The theory is that technology will replace jobs and there will not be enough work to go around. The idea first came to the forefront in the early 19th Century when textile workers began protesting against labor-saving machines like stocking frames, spinning frames, and power looms. This movement eventually became known as the Luddite movement.

A famous economist by the name of John Maynard Keynes promulgated the idea of technological unemployment in the early 1930s. This idea has waxed and waned over the ensuing decades but usually comes to the front when unemployment is high.

Judging by the comments I read; it seems many people today are more than happy to embrace the Luddite argument of technological unemployment. I don’t and I’m going to tell you why.

It’s absolutely true that technology ends jobs, certain kinds of jobs. If tens of thousands of drones are delivering packages and mail all over the United States then we will not need people to drive trucks and deliver goods. What we will need is mechanics, electricians, engineers, and designers to envision, design, build, and maintain the drones.

There was a time when owning a stable was very profitable but the advent of the automobile changed all that. There was a time when being a Chandler (candle maker) was a necessary and important function in society. The same for a blacksmith. Technology ended these jobs but unemployment did not skyrocket. New jobs were created and often better jobs. Skilled jobs that required an education but paid well. Jobs that were interesting and fulfilling.

I think the biggest misconception is that there isn’t going to be any work to be done. Look around. Look at your house, your street, your lawn, your computer network, a nearby bridge, a park, a hiking trail, a power line! Look in any direction and tell me you don’t see work that needs to be done. There is far, far more work to be done than there are people to do it.

Why do we have unemployment? Money. There isn’t enough money to pay people to do the necessary work and things fall into disrepair.

When we free people from delivering packages we make them available to pour concrete, to create art out of lawns, to make beauty where ugliness currently resides.

Will there be a transition as we move into the Automated Age? Absolutely. People who don’t have an education will have an increasingly difficult time finding a job. As automation takes over there will be fewer and fewer unskilled labor positions available.

But the positions that are available will largely be more rewarding and make society a better place. With automated vehicles police officers will focus on crime rather than traffic control. Roadside accidents will vanish, thus reducing the need for emergency vehicles and services. This will lower taxes substantially and reduce the size of government. Car insurance will shrink to nothing. For every awful forecast a Luddite threatens I promise wonders.

A people freed from the mundane and able to create. Robots that make life safer, better, easier, and cheaper.

Not enough work? I don’t think so.