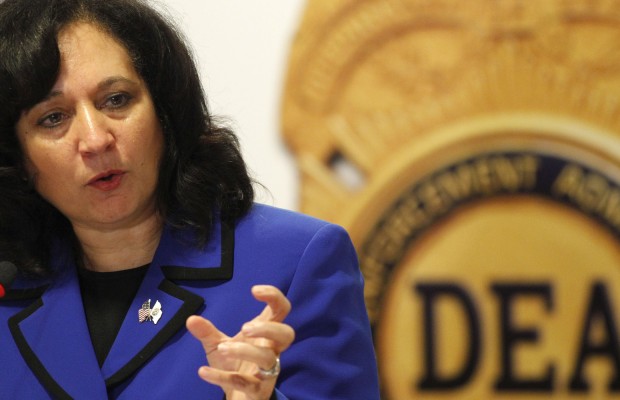 The people have spoken in Colorado and Washington State in regards to making marijuana legal. Polls indicate that most people accept the idea it will eventually be legal nationally. There are those who disagree.

Michele Leonhart is one of those. She heads up the Drug Enforcement Agency (DEA) and has come up with a … well … novel argument to try to persuade people. More on that in a moment. Why should we care about what she says?

One good reason is that you’ve been paying her salary since 1980 when she joined the DEA. Her current remuneration for coming up with the incredible nonsense I’m going to explain to you is apparently a secret. I can’t find out how much she makes. My Search-Foo is strong and after fifteen minutes I gave up.

This afternoon in a committee meeting in which she is trying to justify the $3 billion annual budget of the DEA she mentioned that edible marijuana products, which will be increasingly available in homes to be snarfed up by hungry dogs, might pose a threat to them. She justified this by mentioning a study done from 2005 to 2010 in which two dogs that ate a large amount of a “baked product” that used medical marijuana laced butter died. Could it have been a “chocolate” baked product? Maybe? The article doesn’t say. The last line of the study, you might ask?

UDST may be unreliable for the detection of marijuana toxicosis in dogs.

UDST being the test they used to figure out that in five years two dogs died, maybe because they ate chocolate or maybe because the chocolate had marijuana in it. The study found a significant correlation between increased numbers of pot brownies in the house and dogs eating pot brownies, therefore, we need to outlaw pot; brownies are apparently still legal but you never know!

According to Leonhart it’s all about her compassion for the terrible fate that awaits our canine friends should they eat marijuana, which, by the way, is completely non-toxic to dogs, unlike, say, chocolate. Yes, your dog can eat a pile of marijuana with no ill effects. It’s not toxic for dogs or people. The convoluted logic Leonhart relies upon is that a dog high on marijuana might not be able to throw-up the toxic chocolate he ate!

It couldn’t possibly be that Leonhart is grasping at straws so she and her friends can keep their lucrative jobs in the War on Drugs. No, of course not, it’s about the dogs! The poor dogs!