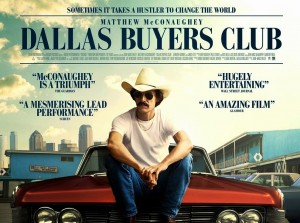 I recently watched Dallas Buyers Club and it occurred to me that I might start giving movie reviews from a Objectivist point of view. By this I mean not so much judging the acting, the story, and the cinematography as much as looking at what sort of message the movie delivers from the philosophical perspective of an Objectivist .

So, onto the review. Dallas Buyers Club tells the story of Ron Woodroof who is diagnosed with AIDS in the mid 1980’s and given thirty days to live. Woodroof then acquires a drug called AZT which is in clinical trials to combat the disease. He immediately grows worse and ends up in Mexico seeking alternative treatment where the doctor thinks AZT is a poor choice of medicine and offers other options which seem to help.

Woodroof realizes these alternative therapies are illegal in the United States where they haven’t seen clinical trials, begins to bring them into the United States in bulk, and sells them to other AIDS patients using the front of a “Buyers Club”. It is illegal to sell drugs directly so patients pay a monthly fee and get all the drugs they require. This goes over very well and soon Woodroof is making money but also helping those in need. Eventually the American Medical Association (AMA) and the Food and Drug Administration (FDA) conspire to put him out of business. By now he is providing the drugs more to help the patients than to make money.

So, what did I think?

One of the core philosophies of the Objectivist ideology is that we must do our best regardless of circumstances and that by doing so we elevate those around us. Dallas Buyers Club certainly passes the muster in this regard. Woodroof doesn’t accept his diagnosis and fights for life although he certainly breaks a few laws to do so. He eventually comes into contact with an overbearing government agency and works to circumvent it.

It must be pointed out that the FDA has stringent policies in place to prevent fly-by-night drugs from entering the mainstream marketplace. There is a testing procedure and it is good that such is in place. However, as a result of Woodroof’s activities new laws were enacted for the terminally ill where they can take such untested drugs at their own risk. The idea being that they have nothing to lose. Therefore its seems to me that Woodroof’s struggle was in the very spirit of the Objectivist Ideal. Not to say he didn’t do a few shady things along the way.

Another major theme of the movie is Woodroof’s friendship with Rayon who is a transgender man with AIDS and eventually Woodroof’s business partner. In the movie Woodroof is rather homophobic although there is some debate about his feelings in real life. That doesn’t really matter to my review. In this movie there is a man who dislikes another man not because of his actions but because of his sexuality. Over the course of the movie this changes because of their growing understanding that they are pursuing the same course. Again we see a positive Objectivist message. You should dislike someone because they don’t do their job properly. You should dislike someone based on their deeds, not on their appearance or sexual persuasion. This is wholly a Objectivist philosophy.

Another character in the movie, Dr. Eve Saks, initially refuses to help Woodroof because of her own loyalty to the medical community and her supervisor. This in itself is good. Loyalty is an excellent trait and when the movie begins Saks has no reason to trust Woodroof over her colleagues. As the movie progresses it becomes clear that large doses of AZT are more harmful than helpful and she begins to change her attitude as well.  The change in attitude of Saks is another classical idea in Objectivism. The willingness to discard preconceived notions and go where the facts lead.

In the end Woodroof dies but he has helped thousands of people and also become a better man. This is a very important idea. Woodroof begins bringing in the drugs to make money, a fine pursuit, but in doing so ends up helping many other people. This is very typical of Objectivist ideas. That by making money we end up helping those around us. By being a success we end up elevating those around us.

So from a Objectivist point of view: 5 stars!

What did you think of the movie?