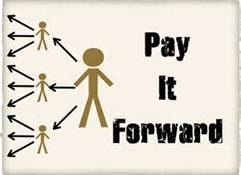 I’ve noticed that the concept Pay if Forward seems to be in the news lately. It’s a concept that goes against everything Randian and she spoke directly to this idea in her novel Atlas Shrugged when John Galt needs a car to ferry Dagny Taggart around Galt’s Gulch. He goes to his friend Midas Mulligan and pays him a dime for the day’s rental.

This scene demonstrates what I consider to be one of the most important concepts of Ayn Rand’s philosophy of Objectivism.

The concept of Pay if Forward is that after you do something nice for a person you don’t expect them to pay you back but to perform a similar act for another person when the opportunity presents itself. I’m certainly not suggesting that we stop doing kind things, I’m just suggesting that there is value to effort and when we reward people for such work we also encourage other people to do the same. When we give the undeserving rewards we encourage people to do nothing.

It’s an odd contradiction and I long struggled to understand that scene in Atlas Shrugged. I enjoy doing nice things for friends, it’s makes me feel good to buy a lunch or give a present to one of my nieces. It’s still not easy to put into words the idea that we should pay for the services we desire because by rewarding the people who provide a good service at a reasonable price I make the world a better place. When I simply give away my skills in the hopes that someone else will do the same I set in motion a chain of events that leads to decay.

It’s a difficult concept because it seems heartless, it’s not. As an example, I think taxes that support a school system are a good thing. I think education has a value to society that is almost impossible to value. I don’t have any children. I strongly appreciate that educating children leads to a better world for me in any number of ways that seem self-evident and therefore I won’t discuss them in-depth now. It’s in society’s interest not to have poor people, it’s in my interest to not have criminals roaming the streets. Paying taxes for schools isn’t to just to benefit children, it’s to make my life better.

One of the things I do supposedly for free is the writing of this blog. I do it to bring my philosophic interpretations of Rand to others, to the masses. This in turn hopefully makes them Randian in their behavior which benefits me.

I sell my books for $2.99. These books are written largely to illustrate my ideas about how we can make this world a Utopia. However, I do not write them solely to make the world a better place. I want your $2.99. I want a lot of people’s $2.99. I want to sell millions of books and make millions of dollars. I want my books to be made into movies and the studios to pay me more millions. I also want you to read about Jon Gray, Silenia, the First Rider, Shinamar the Unbeliever, and General Yumanar, the heroes of my novels who showcase my philosophies.

We cannot make this world a better place by Paying it Forward. This idealism actually leads to our nation and the world becoming a worse place. Let’s examine the ultimate goal of the Pay it Forward philosophy. Imagine a world where everyone helps everyone else without payment. It sounds good but it isn’t. That is a world in which lazy people rule because they don’t have to do anything. They are given everything by others doing good deeds. Of course, eventually this leads to a society where everyone has nothing because no one does anything. Naturally this philosophic endgame is never going to happen because the Pay it Forward concept is, at its heart, bankrupt. It’s going to be impossible to convince people to Pay it Forward to the point where they have nothing left. But, the philosophic goal is to reach that so-called dream world.

We should pay for things so that we encourage people to provide those things we want. We should patronize restaurants that make food we like at what we consider to be  a reasonable price. This allows that restaurant to succeed and we get good food. That’s a win.

If we look at poor people in Westernized countries as opposed to third-world countries we see a difference. Poor people in the United States, in Australia, in western Europe, are not nearly as poor as the destitute in India, Pakistan, Africa. Poor is a relative term and countries that live closer to Randian Objectivism, where the best are rewarded for their efforts, are far better off than their counterparts. This is the benefit of a system that doesn’t Pay it Forward. It encourage those who provide service to continue to do so. It rewards success instead of failure. That’s good for everyone, in the long run even the failures.

Tom Liberman
Sword and Sorcery fantasy with a Libertarian Twist
Current Release: The Sword of Water (yes it’s $2.99, yes it’s awesome)
Next Release: The Spear of the Hunt(Yes it will be $2.99 and awesome)