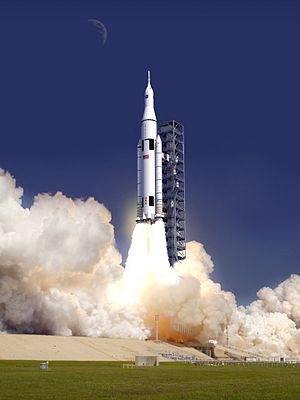 There was a small story in the space section of the science category of NBC News the other day and it caught my attention. I thought about it and then came back to write this post and had to search long and hard before finding it again, it was buried deep. This generally means it didn’t garner much interest in the news community. Well, I noticed.

Before I start I’m going to have to give a small disclaimer. Boeing has a major presence here in St. Louis and some of my best friends work as engineers there. I’m proud of Boeing and my friends although I don’t think any of them work on this project.

The story starts back in January of 2004 when President Bush announced the Vision for Space Exploration. Part of this plan was something called Project Constellation which included the Orion Mars Mission. President Bush vaguely outlined a series of lofty goals for the programs in question. Plans were started, studies were made, money was spent, lots of money. Eventually it was largely cancelled after limited progress was made because of the vague goals and reliance on unsolved technical and design challenges. The plans largely called for technology that someone hoped that someone else would figure out.

This is important. I’m not saying President Bush was wrong to dream big. Dreaming big is a good thing. However, it is vitally important to understand that you don’t achieve your dreams by dreaming more. You achieve your dreams by making a practical analysis of the obstacles and coming up with real solutions. The Bush administration failed this test badly. I think this is symptomatic of possibly the largest problem we face in the United States. Somewhere along the line the lesson has become Dream Big and don’t worry about the small stuff. Well, the small stuff is what makes the boom. Dreams won’t come true if you don’t make a realistic analysis of the steps necessary to achieve them.

I’m reminded of the likely apocryphal story of the World War II era German engineers sent to the Eastern Front to quiz the tank commanders on what they wanted in a tank. In the story a commander takes the engineers out back and shows them a Russian T-34, ‘that’, he says.  The engineers scoff saying they can do much better. While almost certainly not a true story the moral applies. We too often ask for a weapon system that relies on technology that does not yet exist. This leads to huge delays, cost overruns, and out-right cancellations. Look up the F-35 and VH-71 Kestrel as examples.

All right, enough of failure. Why is the SLS doing so well? Here’s why. It was designed using existing technology with upgrade “block” versions that will be able to lift increasingly heavy loads. This is important. They decided to start with something they knew could be done and, as progress was made, scale it up for larger payloads. No dreams there. Existing technology and know-how. A realistic plan. Goals analyzed and obstacles understood. Too many projects are built on dreams and that’s a problem. I see it everywhere and I’d bet that many of my readers out there have a story or two to tell about some great idea that consumed time, money, and effort but failed because people didn’t make a practical plan.

Now, there are critics of SLS because it uses Space Shuttle technology and for several other reasons as well. There is a long way to go before we see if the SLS delivers on its promise or not.

The reality is that right now the project is ahead of schedule and on budget. That’s a good thing. Hooray Boeing!

Tom Liberman
Sword and Sorcery with a Libertarian Twist
Current Release: The Sword of Water (buy it, read it, write a review!)
Next Release: The Spear of the Hunt