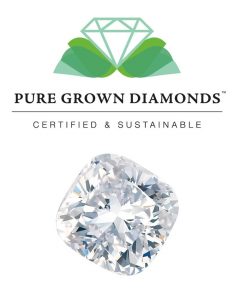 Companies have been able to manufacture diamonds through industrial processes since the 1950s but with advances in technology it is now possible to create a diamond that is equivalent to those found in nature in all respects except, perhaps, resale price. These grown diamonds are significantly cheaper than their naturally occurring counterparts and their share of the market is increasing, much to the chagrin of those companies who sell found diamonds.

I think it’s an interesting study in human behavior because found diamonds and their grown competition are essentially identical from a practical respect. Yet, I imagine most people are so enamored with the illusion of a real diamond they would, if they had the financial wherewithal, generally purchase the more expensive version.

Let me be honest, I find the entire diamond industry to be largely artificial. Diamonds are not particularly rare but for a long time the companies that mine them kept enormous numbers in warehouses to create scarcity. In addition, those same companies launched successful advertising campaigns which promoted the idea of their value. I have no problem with either of these tactics, no one is forcing anyone to purchase an overly expensive rock. I just don’t plan on shelling out a bunch of money for a diamond.

That being said, I’m in the minority as far as this goes. Diamonds are considered an almost necessary declaration of love between a couple. The giving of diamonds from one person to another is considered of great importance in matters of romance. This is why people pay large sums for relatively common sized stones.

It’s also no surprise established diamond companies would like to convince people the grown stones are not equivalent to those found. Those companies producing the grown diamonds are quite interested in overcoming this perception. This is business and all quite normal.

I don’t have any great insight into this issue. I don’t really know if grown diamonds will eventually completely usurp their found counterparts or if the industry will continue to distinguish one as better than the other. Possibly diamonds will simply lose most of their value as people don’t find them useful in matters of the heart anymore. I don’t know, I just find the entire situation interesting from both a marketing standpoint and that of human psychology.

For those of my readers who actually have something more than an emotionless, pea-sized, black, barely beating heart; if you had enough money would you purchase the more expensive found diamond over the grown diamond despite their being molecularly the same?