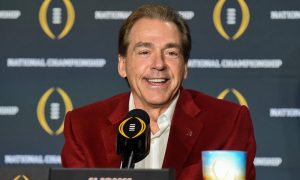 I just read an interesting story at ESPN about how Nick Saban gave a press conference in which he is quite angry. The main rant seems to involve assumptions about his offensive plans for the upcoming season but later he gets to a topic that touches this Libertarian’s heartstrings. Rules created to prevent some perceived wrong that end up hurting far more people than they help.

At issue is my favorite target, the NCAA. College football teams like Alabama hold summer camps for young players. This allows said teams to gain personal relationships with players that often translate to scholarships at a later date. The NCAA just passed a rule that prevents high school coaches from helping at such camps.

Here’s why the rule was made. Coaches like Saban, and more particularly Jim Harbaugh at Michigan, held these camps and paid these high school coaches to help. The high school coaches have strong influence over their players. The hope being that said coach will recommend to their star players they take scholarship offers from Alabama and Michigan.

This example strikes directly to the heart of my problem with such rules. Yes, this system does curry favor from high school coaches to particular colleges. The question we must always ask is: What is the result of the proposed rule, law, or regulation. That is what Saban is talking about when he says:

And we pass some rule that everybody has to live with, or some law, where the consequences mess up a lot of other things. We do it all the time. We’re doing it right now. The NCAA is doing it. We’re going to change the way we have summer camps. We can’t have high school coaches working summer camps. I mean, it’s the most ridiculous thing that I’ve ever seen. It is what it is and whatever they do, they do.

In this case the high school coaches are still generally going to be favorable to local colleges because of ongoing relationships so the rule itself really doesn’t solve the problem.

Now the coaches won’t be able to bring their players to the camp so some third party is going to do it. Perhaps a family member, an agent, a want-to-be agent, a friend with dollar signs in their eyes, whatever. That issue isn’t solved, just shifted to a new source. In addition someone is going to have to coach those camps. They are happening regardless of the new rule. That someone is likely going to be less qualified than the coach, this hurts the young players. The coach loses as well because teaching at these camps gives them invaluable experience.

Perhaps this seems like a nothing issue to most people but it is a microcosm of Washington D.C., your statehouse, your municipality.

We pass laws with the best of intentions but end up hurting not only the very people such rules are intended to protect, but a host of other people as well.