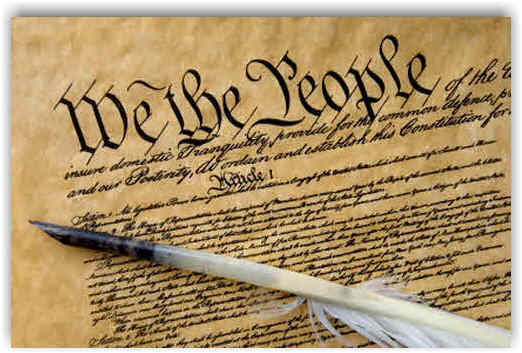 As a Libertarian I’m a supporter of the Constitution of the United States. That’s a period at the end of that sentence.

I find it extremely discouraging that people seem to increasingly care very little about that document, regardless if whether a Democrat or a Republican. In elections Libertarians generally get about 1% or less of the vote; this means that 99% of voters in this country vote for Democrats or Republicans.

If people only care about the parts of the Constitution that are expedient to their cause of the moment it means the document doesn’t have any real meaning at all. We live in a Representative Republic wherein the people choose their elected officials. If the people don’t care about the Constitution then the duly elected representatives will not either.

Georgia is a case in point that strikes home so powerful, so undeniably that I’m using it as an example. This doesn’t mean that Georgia is alone in their cherry-picking of Constitutional Rights, it just means that it’s the example I’m using. I think the problem extends to every state and every district in this country.

The Georgia legislature allows firearms to be carried just about anywhere.

A well regulated militia being necessary to the security of a free state, the right of the people to keep and bear arms shall not be infringed.

The right of the people to be secure in their persons, houses, papers, and effects, against unreasonable searches and seizures, shall not be violated, and no Warrants shall issue, but upon probable cause, supported by Oath or affirmation, and particularly describing the place to be searched, and the persons or things to be seized.

This absolute insistence on following the Constitution when it promotes a policy you agree with and utter disregard for the Constitution when it protects someone you don’t like is extraordinarily disturbing to me. Even worse, the proponents and opponents of these two policies are inversely related to the political party to which they belong, unless they’re in the 1% with me.

This means that 99% of the people don’t care at all about Constitution, they care about political expediency.

The people who argue both sides of both situations can rationalize their position all they want. I’m not hearing it.

Here’s the deal. People are allowed to have guns. The government cannot search me without probable cause.

If you’ve got a problem with either of those things then you’re in the majority. If you love freedom then that should cause you great concern.