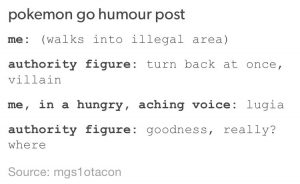 As if you didn’t already know, a game called Pokemon Go has become hugely popular in the last week.

Along with its popularity I’ve seen a huge spike of news stories and comments in social media attacking the game and its players. The question I want to try and examine today is why is there all this hate and fear?

The object of Pokemon Go is to physically wander around in public places and collect virtual Pokemon. These are little creatures that do battle with one another. A player who has stronger Pokemon can defeat players with weaker Pokemon. Thus it becomes necessary to collect ever stronger Pokemon to win battles. Players can join teams where groups battle one another. What makes Pokemon Go different is that you have to venture out into the physical world to find and collect your combatants. And people are doing it by the millions.

People are getting out of their houses and wandering the world at strange hours and visiting places they might not have visited before. They are getting exercise they would not normally get. They are meeting strangers whom they would not normally meet. Social boundaries are crumbling as people who would never so much as give each other the time of day because of their jobs, race, religion, sexual orientation, or physical locations are now meeting and finding common ground.

That, my devoted readers, is causing abject fear in the establishment. I know it sounds like I’m making way too much out of this but the plethora of news stories about the dangers of playing Pokemon and the social shaming I’m seeing everywhere must have an explanation. People of all religions, colors, nationalities, ages, sexes, and sexual orientations are finding out they have something in common besides our traditional way of separating ourselves. They enjoy playing the same game.

And, by golly, that’s with whom we should be associating! We should hang out with the people who love the same things we love regardless of all those other factors. Factors which are often merely the circumstances of our birth.

Look at that forty year old, white computer programmer sitting on the bench with those two young black men in baggy trousers teaching the police officer how to play. (That’s one of the few positive stories on Pokemon Go I’ve seen). You’re fooling yourself if you think images like that don’t frighten the authorities. What would the world be like if people with the same interests hung out with each other and didn’t worry about what everyone else was doing?

What would happen to nations? To boundaries? To government?

I know, I know, I’m making way too much out of this. Still, my friends, go play Pokemon Go and make some friends you otherwise would never have met.

Be afraid, authority. Change is coming and it comes from unexpected sources.