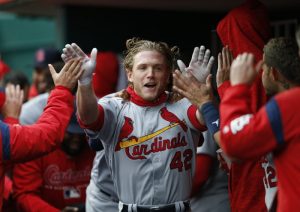 ecently a St. Louis Cardinal outfielder, Harrison Bader, made a game ending catch that was rated as a Five Star catch although it didn’t appear, to the eye, to be particularly difficult. It gives me good reason to discuss the difference between a metric based analysis and the eye test. The eye test says: If it looks like a difficult catch, it must be one. If it looks easy, then it probably was. The eye test has merit but statistical analysis should always triumph.

First a quick look at how Statcast derives their rating system. They look at four factors. How far the outfielder has to travel to get to the ball. How much time that outfielder has. The direction the outfielder must run. The proximity to a wall in which the catch is made. Basically, Statcast feeds every ball hit into the outfield into a database and applies a calculation to see what percentage of the time the outfielder at that position would make the catch. Anytime the number drops to 25% or less, it is considered a Five Star catch.

When Bader made his catch the other night it certainly didn’t pass the eye test. It looked like a good play at best. This is where metric based analysis is decidedly better than most subjective opinions. Bader is extremely fast and seems to have an excellent feel for the flight of the baseball immediately off the bat of the hitter. This means he gets started in the correct direction very quickly and arrives at the intersection point with the ball rapidly. It’s true that Bader certainly makes that play more than 25% of the time. I’d hazard a guess that he makes it more like 80% of the time. That doesn’t change the fact that 75% of the time a ball hit with a similar trajectory goes for a base hit. That’s the power of metric based analysis.

Remember, Bader’s own catches are part of that mix. Because he catches a lot of balls of this nature that drives down the difficulty rating of the catch. If you take Bader’s catches out of the equation the catch becomes even less likely.

Statcast and its outfield defensive ratings is a relatively new statistic. There will certainly be some adjustments going forward and the larger the data set, the more accurate the percentages. That being said, it was a Five Star catch by the best measurable rating currently available. I’ll take that over the eye test any day of the week.

You’d be wise to the do the same and that applies to other aspects of life as well. It’s easy to be fooled when doing the eye test. Look at the numbers, trust the numbers. Do you know in the United States, violent crime is at its lowest point in over fifty years? Can’t argue with the math.