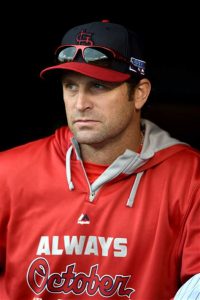 I noticed an interesting trend on the Facebook posts of some of my women friends in the aftermath of the firing of St. Louis Cardinals manager Mike Matheny. Many of the women commented on what a good-looking fellow is Matheny and that they’d miss him for that aspect at least. Male friends immediately responded that if men made such a comment about an attractive woman coach or manager they’d be subject to attack from Social Justice Warriors.

It’s an interesting point because it’s true. Men who make such comments about attractive female athletes are often attacked as misogynistic. The conclusion that men seem to be drawing from this truth is, on the other hand, completely incorrect. They should be able to make such observations and so should women.

There is absolutely nothing wrong with pointing out the attractiveness of another person and women have every right to make such observations, as do men about good-looking women. Our looks are simply a trait, like any other.

Certainly, Matheny’s record as a manager and ability to lead the team is a far more important factor in his being fired than his relative attractiveness. The issue is we can’t get angry at someone for pointing out what they perceive to be the truth. We can certainly suggest his appearance shouldn’t be a factor in whether or not he keeps his job although the women posting made no such claims. What we should not do is pretend he isn’t viewed as attractive by women.

I wrote an article about a golfer named Paige Spiranac and how she used her looks to get an invitation to a golf tournament for which she would otherwise not be qualified. That’s all well and good. A person should use all their assets in an attempt to succeed in their chosen profession and life as a whole. There is nothing wrong with noting such things.

It’s important to make decisions based on pertinent factors. For Matheny, his looks have little impact on his managerial abilities. For a model, her or his strategic baseball knowledge is of little consequence to success. The person doing the hiring and firing is the one who makes these decisions and if they decide poorly, they too will suffer the consequences.

If one of my female friends were in charge of the Cardinals and hired Matheny because of his appearance rather than his skills as a manager, she would eventually lose her job as well. That being said, what’s wrong with pointing out a physical feature that doesn’t necessarily correlate to job performance? To my way of thinking, nothing.

A final point as to Matheny himself. He suffered numerous concussions during his career as a catcher and his mannerisms have always struck me as somewhat dulled. I hope he is consulting medical professionals and I wish him all the best in his future endeavors.