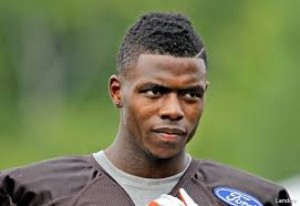 There’s a fairly major sports story being reported all over the internet right now and it raises some interesting Libertarian questions for me. A football player named Josh Gordon is being suspended for one full season because he tested positive for … alcohol.

At first glance it would seem a severe punishment but there are some circumstances that make it more reasonable. The question it brings to my mind is that perhaps we as a society are too interested in the private lives of people and in the long run it does us no good. Let me detail the situation completely.

Gordon went to Baylor to play college football and received his first suspension when police found he and a teammate asleep at a Taco Bell with marijuana in their car. A year later Gordon tested positive for marijuana and was kicked off the team. He then sat out a year and became eligible for the NFL draft where the Cleveland Browns selected him in the second round.

He had an excellent rookie season and a spectacular second season making the NFL all-star game, the Pro Bowl. He was widely considered one of the best young wide receivers in the league. During that off-season he was arrested for driving while impaired and suspended for ten games during the 2014 season. When he returned he played well although had some internal discipline issues with the Browns. Because of the DWI arrest he became subject to an NFL policy where they are allowed to test him for alcohol in his bloodstream. If he is found to have such he then becomes a second time offender by the rules and is suspended for the season. That is what just transpired.

The rules were clear and Gordon apparently drank when he knew doing so would make him subject to severe penalties. That’s his responsibility and his mistake. I don’t exonerate or excuse him. What troubles me as a Libertarian is the policy itself. I can understand an escalation of penalties for criminal activities or methods taken to gain a competitive advantage on the field of play. The entire NFL anti-drug policy started out as a way to test for Performance Enhancing Drugs but it now reeks of Big Brother.

Why would Gordon be banned from ever drinking? How does that serve the NFL? I understand he had a DWI and if he did it again I would absolutely agree with the suspension. But drinking is not drinking while driving.

I find it to be a microcosm of what is going on in the United States. A person’s entire life is somehow open for review. Anyone who tells a joke that doesn’t come across as it was intended is vilified. While our government is busy finding a plethora of things to make illegal it seems we ourselves are finding new ways to judge one another negatively. We rule people out for jobs not based on their talent and ability but simply because they said or did something that some people find offensive.

It’s my opinion that we should be judged on our actual performance. If someone is a racist but makes hiring and firing decisions solely on performance then their racism is not my business. If someone is a drunk but does their work in superior fashion then their drinking choices are their decisions. If someone is gay, an atheist, an evangelical Christian, a Muslim, spends their free time watching porn, eats only fast food, drives a gas guzzler, drives a Prius, plays with dolls, or anything else legal that doesn’t effect their performance then I need to mind my own business.

Do I have to be friends with a racist? No. That’s my decision to make.

I certainly think the NFL has the right to make their work policies and enforce them.

I’m just asking if all this judging is making us better or not? Are we eliminating highly qualified people from jobs because of things that are completely irrelevant to their performance? I’m of the opinion that we are and it’s not healthy. I can see how people will disagree.