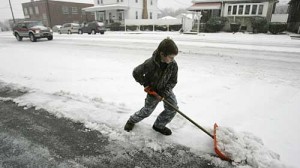 There’s an interesting little story in the news related to the blizzard that sort of wasn’t on the Eastern Seaboard this week. A couple of young men decided to go door-to-door soliciting their snow shoveling services. The problem is that they were doing it in a community that had passed an ordinance banning door-to-door solicitation.

The comment section of the story and apparently Social Media is filled with diatribes about how awful it was that these young entrepreneurs were defeated by the big and cruel government. I have some sympathy for those who are angry in that the ordinance in question wasn’t really designed to prevent young men selling snow-shoveling services but rather con-artist types from peddling their wares. However, I don’t have a lot.

The city in question, Bound Brook, N.J. has elected representatives who are tasked with passing various rules and regulations to make the city run more smoothly. Frankly, I don’t like it when people come pounding on my door here in U. City, MO and I wouldn’t mind at all if the city passed an ordinance banning the practice. The fact that after I refused snow-shoveling services once and the would-be entrepreneurs went into my garage and stole my snow shovel might make me a little bit of an angry old man on this one.

We live in the information age. If I need snow shoveling service then I can find it quickly and easily on the internet. I don’t want or need anyone at my doorstep. If the boys wanted to provide the service they could have emailed locals easily enough or created a quick website. If they had planned long enough they could have had fliers up before the storm hit. They could have told neighbors and friends of their plans. I’m just saying there were plenty of choices besides going door-to-door which was an illegal activity in their town.

The city council might amend the ordinance to allow for leaf raking and snow shoveling solicitation in the future although I’m certain those businesses have long since been taken over by professional services that hire young men like Matt Molinari and Eric Schnepf to do the work.

The days of lemonade stands and young men shoveling snow are all but gone, that’s reality. And stay away from my door!

One thought on “Illegal to Shovel Snow?”