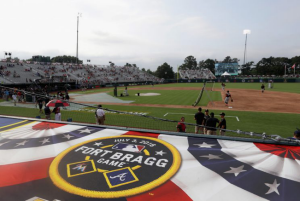 There are a lot of people angry at a man named Zack Hample this morning because he attended a baseball game held at Fort Bragg.

The game was held on July 3rd as a tribute to military personnel and they and their families were given tickets. Hample is an avid, to understate it, collector of baseballs. He’s traveled all over the United States and collected over 9,000 of them from various different stadiums. He was eager to get a ball from this unique event and presumably paid someone to get their ticket. He was offering $1,000 for such a ticket.

People are angry that Hample got a ticket, attended the game, and collected a ball. They argue that he “stole” the seat from a military person and thus the ball as well.

No one forced the soldier to sell his ticket. From reading the comments on Twitter the soldiers were told not to give or sell the tickets to anyone except active duty military personnel and family. Yeah, good luck with that. There are going to be plenty of soldiers who got tickets who have no interest in baseball. There are going to be plenty of them, like me, who have no interest in souvenirs. They should be able to sell their ticket to the highest bidder. I’m willing to bet that many soldiers will sell tickets and other items they got at the game. That’s their business.

I certainly understand people don’t like it. I’m just suggesting that such people are living in a fantasy world.

Hample wanted a ball and was willing to pay for the opportunity to get one. A soldier wasn’t much interested in a ball or the game and sold him the seat. Two adults completing a transaction.