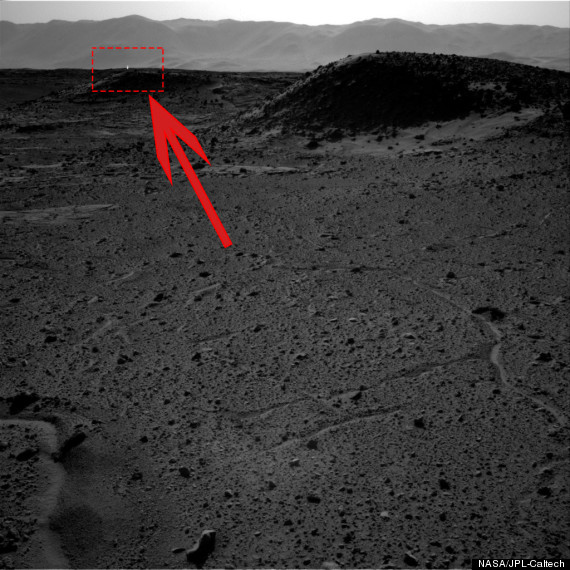 There’s a news story making the rounds which I’ve been ignoring because I didn’t think I had anything interesting to add to the conversation. I’ve changed my mind.

About a week ago Curiosity took a picture on Mars in which there is a glint of light on the horizon. A picture taken a day later from the same position did not show the glint. There are a number of explanations as to what caused the glint but I’m not going to talk about the rational explanations. Nor am I going to spend much time talking about the theories that it represents aliens living underground on Mars who somehow caused the anomaly.

Mars is a barren world with barely any atmosphere. We’ve landed any number of vessels on the planet itself and spaceships with high-resolution cameras are constantly orbiting Mars taking pictures. We first sent a robotic ship by Mars in 1965.

Earth bound telescopes have been trained on Mars since 1672 and have only gotten sharper in resolution and more available to amateurs. Radiation bombards the planet relentlessly. Water is likely present but only deep below the surface. There are no signs of a civilization on the surface, no signs of animals or plants, no chemical signatures indicating living creatures.

So why, why would anyone think that a glint of light in one picture is anything other than sunlight bouncing off a shiny rock? Or an illusion of photography? Anyone who has taken a picture with a camera on earth knows that light is a tricky fellow.

When you go to the store and a somethings inexplicably falls off a shelf nearby do you assume that it was Bigfoot lurking in the next aisle using telekinetic powers to alert you of an upcoming Supervolcanic eruption? Or do you shrug your shoulders and assume that something was perched precariously and a small vibration sent it to the ground?

What is the psychological makeup of someone who immediately leaps to the most unlikely explanation? What are they thinking? Are they thinking at all?

That’s my question. I don’t know that I have a good answer. I know that my mind always looks for the most logical explanation to any event and a thriving community of intelligent creatures living beneath the surface of Mars and pointing their flashy lights at the rover would never, ever, have crossed my mind when I saw that picture.

That being said, I think this sort of thinking is not unusual. Everyday I read about or actually experience someone who believes absolutely unlikely things in lieu of a very reasonable explanation.

I’m of the opinion that people largely believe what they want to believe over factual evidence. If a person wants there to be Martians then that person is going to grasp at every ridiculous explanation to believe Martians exist.

I ask you an important question: What would the world be like if people only believed what the evidenced suggested and threw out their preconceived notions?

It’s a world I dream about. It’s a world that I believe can exist. I’m certain people are capable of thinking rationally all the time. Of making decisions based on factual evidence.

I see a world like this in our future. When disease is eradicated, energy is abundant and cheap, the population static with food for all. Automated machines doing the work people don’t want to do. Free people living eternal lives dedicated to achievement.

The novels I write are about a Sword and Sorcery fantasy world but there are characters in that world seeking the same thing I’m seeking in this one. There are those that thwart them. You should read my books and maybe you’ll see that same world I see in my mind’s eye. That endless Utopia where humans stand astride the galaxy always striving to be better, ever better.

Do you want to live in that world?

One thought on “A Glint of Light Equals Aliens … Why?”