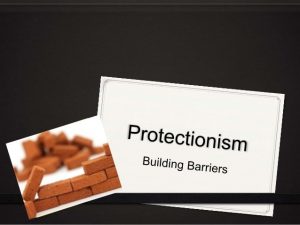 The recent election in the United States brought an avowed Protectionist to power and this raises interesting and complex economic questions. As a Libertarian I’m opposed to such policies.

I will not pretend that economics is a simple or easy to understand discipline. Nor do I even hope to convince those who agree with a protectionist agenda. I only hope to show you the situation is more difficult to understand than you might think.

At issue is the manufacturing of cars in Mexico. In the last twenty years building small cars in the United States has become an unprofitable business. When NAFTA was passed protectionism in North America was largely abolished. If you produced your goods in Mexico, Canada, or the United States then other countries are forbidden protectionist policies like tariffs, taxes, or other means. Free trade. If you can produce something more cheaply than the people in a neighboring country then you were allowed unfettered access to that market.

This means economic hardship for some and prosperity for others. If making a car in the United States cost X and making the same car in Mexico cost Y then manufacturers have a decision to make. In the last twenty years that decision was largely to move facilities to Mexico for production of small cars. The vagaries of economics made manufacturing them in the United States less or not at all profitable. This meant the loss of certain jobs. And that’s what Protectionists talk about the most. Yes, there is a loss of jobs.

However, let’s examine the likely outcome if the United States propped up the manufacturing of small cars through tariffs and other protectionist ideas. Japan and other car making nations would have gone to Mexico, as they have done and continue to do. They would then have been able to offer cars at a significantly better price than the U.S. companies could match. The only way to save those jobs would be for the U.S. to provide increasingly aggressive tariffs or to cut wages dramatically. Thus people in this country would be paying far more for cars or earning less, all to support jobs. That’s reality. That’s the inevitable outcome of protectionism.

Protectionists paint jobs going to Mexico and businesses moving plants to Mexico as a terrible thing. As stealing jobs from U.S. citizens. Movement of manufacturing to where it is best performed certainly saves consumers money but in the long run saves jobs as well. The jobs supposedly saved through protectionism come at a terrible cost and only delay the inevitable.

You will pay more for the same car until propping up the difference in price becomes unsustainable and the plant goes out of business anyway. The United States will produce goods at a higher price than everyone else in the world, meaning only we will purchase such products. Our global competitors will slowly take all our markets and in the meantime we’ll be paying more for everything. Businesses will eventually go bankrupt in increasing numbers and job losses and unemployment will rise as an inevitable result.

All to artificially preserve unsustainable jobs.

Protectionists wail about how manufacturing is going to other countries but the reality is the number one employer in the United States, besides the government, is Wal-Mart. They employ nearly six times more than the runner-up, McDonald’s. The main reason? Manufacturing performed in China. When Ford and Chrysler move plants to Mexico it actually creates wealth in this country. It creates jobs. Just different ones.

Protectionism has an allure. Be aware of the long-term dangers it presents.

2 thoughts on “Mexico, USA, Cars, and the Complexity of the Protectionist”