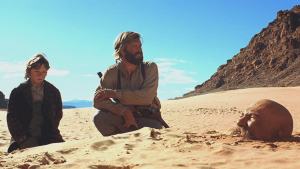 While watching a clip from the classic Robert Redford film Jeremiah Johnson a bit of a throwaway line caught my attention; I was much the same myself. Johnson is trying to decide on a name for the young boy he took off the hands of a crazed woman who had seen most of her family murdered. The boy is not in a talkative mood as they ride along. Johnson gives him the name Caleb as it is one Johnson has much admired. The boy does not respond. Rather than pursuing the discussion, or chastising the lad, Johnson utters the line in question.

It’s a good line. I’m of the opinion it has a lot of relevance in today’s world. It seems people have always enjoyed being critical of one another but with advances in communication and the advent of social media such has risen to new heights. Much of the criticism involves telling other people how they should think or conduct their lives. This is what I was much the same myself addresses.

Johnson recognizes that, as a child, he wasn’t particularly talkative and when Caleb exhibits a similar attitude, Johnson accepts it without criticism. It is very easy to criticize people making what we deem as similar mistakes to those we made ourselves as children. I think the actions that tend to draw the most outrage are often those things we see in ourselves. The traits we dislike about ourselves and see in others.

Most often I see it in adults, like myself, in criticizing the way younger people are going about their business. Kids today. We were kids once but that is a fact apparently lost upon most of the critical curmudgeons of the world. Even as adults we do unwise things on a fairly frequent basis, but when someone else does something stupid, we are eager to point out their foolishness.

The next time you are considering chastising someone for their behavior or opinion, think about that line. I was much the same myself. Try it out. You might be pleased with the result.