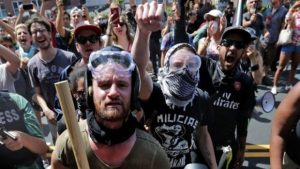 There is a new piece of legislation making its way through Congress that proposes an extra fifteen-year penalty for people who commit a crime while wearing a mask, Antifa. There is already similar such legislation in many states and the federal government for people who commit a crime motivated by hate. Who opposes and supports such legislation shows us the bankruptcy of the ethical philosophy of both Democrats and Republicans.

The gist of the problem is that government is trying to give extra penalties to people who commit similar crimes for different motivations or because they are wearing a mask. So now we have three classes of assault. If you assault someone you have committed a crime and are punished. However, if you do the same and are motivated by hate, you get an extra penalty. If you do the same and are wearing a mask, essentially Antifa, you get an extra penalty. The crime is the assault; not the motivation behind it or the clothes you wear while committing it.

I’m confident you can see the tremendous hypocrisy in this situation and I won’t spend any more time on that. What I will talk about is the enormous danger the government presents to all of us when it attempts to legislate such matters. What the government is attempting, in both cases, is to legislate against groups they see as aligned against their interests. In one instance it is Democrats against white supremacists and in the other it is Republicans against Antifa.

In both cases such legislation doesn’t reduce the risk of violence but increases both it and the danger of armed revolution. If enough people feel the government is willing to make up laws in order to put them in jail, they will simply attempt to create a new government. We see this path throughout history. In the United States we have the ability to vote in a new government and have largely avoided violent attempts at revolt.

Our government seems increasingly willing to imprison those they see as political enemies. This course of action is expressly forbidden in the Constitution of the United States. The Fourth, Fifth, Sixth, Seventh, and Eight Amendments all attempt to prevent the government from enacting such legislation. They do so not only to protect the people but to save the nation from the inevitable violent revolt that such imprisonments eventually engender.

A politician must not take sides in political debate. She or he must simply present arguments and persuade people to vote accordingly. Anything else tempts disaster.

Don’t be a hypocrite, be a Libertarian.