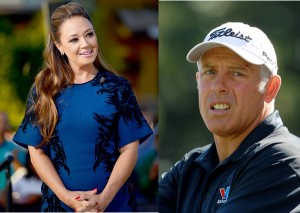 They’re both jerks. I thought I’d take the suspense out of this blog right away.

Steve Williams is a caddie who worked for Tiger Woods and now selling a book about his time on the PGA Tour.

Leah Remini is an actress who was also a Scientologist and knew Tom Cruise and Katie Holmes pretty well. She’s also selling a book.

They are both making the media rounds telling anyone who will listen how horrible are Tiger Woods, Tom Cruise, and Katie Holmes. Remini tells us of a crying baby. Williams says he felt like a slave. They both have lots of horrible things to say about other people as they pursue selling their books.

Listen, I’m no fan of Tom Cruise and I’ve got not much nice to say about Tiger Woods. Scientology is just another useless religion from this Atheist’s point of view.

But what Remini and Williams are doing is nasty, mean, and, well, I won’t use the words I’d use in a private conversation. As much as I dislike Cruise, Woods, Scientology, and the rest; I have new leaders in the douchebaggery awards for 2015.

Okay, I made that up. I don’t give out any award like that but I’m thinking about it!

There are people we all dislike, even hate, but we don’t go around saying horrible things about them, at least not publicly. Why? Because it shows a complete lack of character. That and it makes us look like total … well you know.

I won’t go on here, I’ve said what I meant to say.

2 thoughts on “What do Steve Williams and Leah Remini have in Common?”