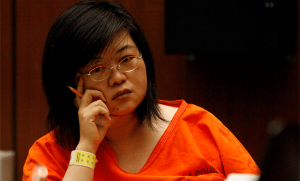 Dr. Hsui-Ying ‘Lisa’ Tseng was arrested back in 2012 for writing over 27,000 prescriptions over a three year period. She was just found guilty of three counts of second degree murder because three of her patients overdosed on those drugs and died. She was sentenced to thirty years on prison.

I think there is a lot to discuss about this series of events.

Let’s first dispense with the fiction she was merely a doctor prescribing medication to needy patients. Tseng was not. She was getting rich selling drugs to those who used them for recreational purposes. She was fully aware of this fact.

There are a number of points I’d like to discuss.

The War on Drugs has largely been prosecuted on illegal drug dealers and poor drug users. Wealthy drug users go to unscrupulous doctors and get their “legal” drugs. Legal drugs cause more overdose deaths than illegal and yet are largely immune to interdiction. This hypocrisy is easily explained. Those with money influence government policy. This means that the Scales of Justice are so uneven that those on the wrong side become disenchanted with the entire nation. This is not a recipe for a healthy nation.

The fact that pharmaceutical companies are completely immune to prosecution because of their contributions to the campaigns of our government officials further indicts the system. The sheer number of pills Tseng was prescribing was surely noted by the companies providing her and yet they did nothing. Because there was money to be made. Let’s not pretend we don’t know this is the case. We all know pharmaceutical companies are well aware their product is being used for recreational, not medical purposes, and yet we don’t charge them. They are surely the biggest drug manufacturers in the world and doctors are their pushers. Unscrupulous doctors are their best clients. They know it, you know it, the police know it, prosecutors know it, and government officials know it. Let us not live in a fantasy world.

My next problem is the charge of murder. Certainly Tseng prescribed drugs that were not needed but she did not force the person to take those drugs. She did not even seek out the client. She merely provided a service to a willing customer. Someone came to her, purchased something, and then used it to kill themselves. If overprescribing is a crime, charge her with that.

You might think that the prosecution of Tseng would make me happy. At last a rich person is being charged the way poor people and drug dealers have long been prosecuted. You would be wrong.

So, you might well, ask, if you make all drugs legal; what do we do with people like Tseng who prescribe to those without a medical need? Who prescribe to children? Am I advocating distributing drugs to anyone who can afford them at all times?

In a sense yes, but also in a sense no. Doctors take something called a Hippocratic Oath. One line of that oath is as follows: I will apply, for the benefit of the sick, all measures which are required, avoiding those twin traps of overtreatment and therapeutic nihilism.

I’m of the opinion that drugs should remain under the purview of physicians who understand their effects and can prescribe them to patients with instructions for proper use. Physicians who fail to do so should lose standing with their local medical organization. Physicians who believe patients are using drugs for recreational purposes should recommend treatment centers and do their best to help the patient. Pharmaceutical companies should have the option to cut off supplies to doctors they believe are not helping their patients but harming them.

Is this a perfect solution? Hardly. Doctors who lose their standing will still be able to prescribe drugs and make money but at least patients will know they are dealing with such physicians. Those bent on abusing drugs will be able to do so and I do not deny that there will be many such. But how is that different than the current system?

At least under my plan patients will get medical grade pharmaceuticals and doctors will get a chance to offer aid to addicts rather than simply sending them to the underground drug trade where compassion is in short supply.

At least under my plan our law enforcement officers can focus on murder, burglary, rape, and other crimes. The rift between the police and the citizens they purportedly serve will begin to heal. Police will not longer die in shootouts with well-armed and wealthy illegal drug dealers.

Will we end drug abuse ever? No.

Still, I remain convinced making all drugs legal and relying on ethical doctors to police their own ranks is a better strategy than the War on Drugs.