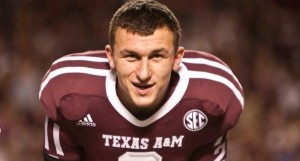 An NFL quarterback by the name of Johnny Manziel is making news these days for his erratic behavior and his father is expressing concern for his son’s safety. In another story a former NFL player named Brandon Marshall, who struggles with Borderline Personality Disorder, offered compassionate and sound advice for Manziel.

The picture below is a list of reasons why people could be put into insane asylums in the mid to late 19th century. 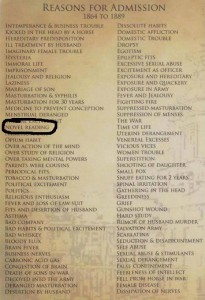 In particular women were put into such institutions simply because they behaved in a way in which male dominated society did not agree. In addition people, often women or the elderly, were put in such places simply as a way to steal their estates.

This began to change when a brave woman named Nellie Bly had herself incarcerated in an asylum and wrote a book about her experience.

After the horrors described by Bly, many states wrote laws preventing husbands from simply ridding themselves of unwanted wives both legally and without recourse.

This is the heart of my blog today. I’m a Libertarian and not an Anarchist and these sorts of laws are one of the many reasons why I feel this way. Such legal intervention from the government was absolutely necessary to protect a vulnerable group of people, in this case women and the legitimately insane who were suffering in an environment that can only be described as torture.

It is also the reason why it is so difficult to get Manziel into treatment should he not want it. He has refused such help and his father is upset that the hospital at which he most recently stayed simply allowed him to leave because he wanted to depart.

This is the both the price of freedom and the importance of minimal government oversight displayed for all to see and understand. It is vital and necessary that laws be put into place and rigorously enforced making it difficult for a person to be put into an insane asylum without their consent.

To pretend that people will not be so incarcerated without such laws is an exercise in denying human nature. Men will always want to extricate themselves from marriages without paying the price, and in this modern times, women as well. People will always want to steal the estates of their parents through such methods. To deny this is to live in a fantasy world. There are many unsavory people in this world and laws, fairly applied and with limited scope, protect us from such as they.

And yet, such protections endanger us as well. It is difficult to get someone help who is truly in need. Many obstacles must be overcome in order to get someone aid if they do not desire it. This is the price of true freedom which Libertarians and even more so, Anarchists demand. This is personal responsibility even for someone in apparent and obvious mental trouble.

I recognize that there are far too many laws with far too broad a scope. But this does not mean all governmental oversight should be abandoned.

These are difficult questions and there are no simple answers. Not for Manziel and his family or for Anarchists and Libertarians.

Thanks for reading and feel free to comment, even in dissent!