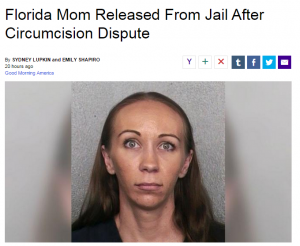 I just spotted a story from Good Morning America that blares out that a woman was recently released from prison after disputing the circumcision of her son. The headline in this case is actually not bad, it’s the story itself that is misleading.

If you read the story they simply state that the son of Heather Hironimus was to be circumcised and that when she refused to allow it, she was put in prison.

What actually happened was that Hironimus and the boy’s father have been in a dispute about the boy since before he was born. As part of that dispute Hironimus signed a parental agreement document that stated she agreed to have him circumcised. She later refused to honor that signed statement. The boy’s father, Dennis Nebus, then asked the courts to enforce her agreement, which they did.

At that point she didn’t show up for the procedure and was found guilty of violating the court order and thus put into prison.

So while the headline was actually not bad the fact that the person who wrote the story left out absolutely vital information means it, sort of, fits into my misleading headline category!

Have a great Memorial Day.