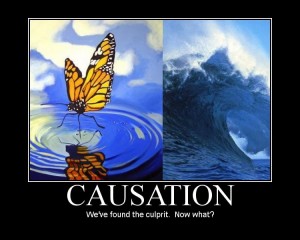 A man named James Ryan is facing charges of vehicular manslaughter for starting a chain of events that ended in a police officer being killed.

The entire case revolves around a legal concept called Causation. If you are interested in all things legal I cannot recommend highly enough that you read the Causation article at Wikipedia. It is beyond fascinating but for those of you without the patience or inclination I’m going to summarize both the events and the legal case.

The incident occurred as follows: Ryan was driving while intoxicated and clipped another car on the expressway and then stopped while still on the highway. A following car then hit his car spinning it around. Officer Joseph Olivieri arrived on the scene and at some point had Ryan on the side of the road with his hands on a guard rail. At this time another car hit Ryan’s car and then Olivieri, killing him.

The legal concept of Causation is quite complex but basically relies on the idea that if someone commits an action there are often obvious ramifcations to that action and that person can be held legally responsible for those events.

The example in Wikipedia that I think sums up the situation pretty well describes hitting someone in the road and then leaving them there rather than removing them from danger. The person is then run over and killed by a third party. The injuries from the original accident were not life threatening. The person who committed the original crime is guilty by the principal of Causation because knowingly leaving a disabled person in the middle of the road is fairly obviously putting them in danger of being hit again.

However, if the person lying in the middle of the road is struck by lightning and killed, then the person who committed the original crime is not guilty by reasons of Causation.

Now to the case at hand. The prosecutors believe, and an Appeals Court decision agrees, that Ryan should have known that by driving drunk he could get in an accident. That this could bring the police. That police on the scene of an accident might be hit by another car.

This is, to my eyes, ridiculous. I’m not a lawyer or a judge. What Ryan did was drive drunk and cause an accident. That is the extent of his crime, a serious crime to be sure and for which he should face penalties.

If Ryan is convicted I see no reason why police could not charge virtually anyone with anything. There is not a single one of us who goes even a day without committing some sort of infraction be it speeding, jaywalking, rolling a stop sign, turning without signaling, switching lanes without signaling, or something of the ilk. Whatever other, more serious crime, happens in relation to that is something for which you could be charged.

These charges, filed and successfully appealed, are extraordinarily troubling to me.

I strongly suspect that most prosecutors would never attempt such legal maneuverings and the death of the officer likely prompted such over-reach in this case. But that is no assurance of safety for any of us.

Although we might find Ryan loathsome for driving while intoxicated and understand the pain of the family and friends of the officer killed, those are not reason enough to put a person in prison for up to twenty-five years for something he did not do.

Justice is an important concept and these charges do not serve it.