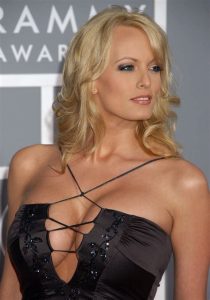 Stormy Daniels was recently arrested when patrons at the strip club she was dancing at touched her in a non-sexual way. This is apparently against the law in Columbus, OH. Daniels is in the midst of a lawsuit against President Trump in regards to sexual relations between the two. The arrest is an egregious example of selective enforcement the likes of which is destroying the relationship between the police and the citizens they supposedly serve.

The idea is simple enough. The state or local government passes a law and law enforcement agents are tasked with enforcing it. We have a number of problems in this case.

The first of which is the law goes against almost everything for which a Libertarian stands. If two consenting adults want to touch one another then the government shouldn’t be involved in any way. I understand laws against lewd behavior in public but the location of this offense, a strip club, is specific enough that no one who goes there is going to see anything they don’t want to see. Certainly, they can leave if they do.

The second problem is perfectly clear, Daniels was not the only stripper touched in a non-sexual way during the course of the evening. It is obvious dancers and patrons touch one another in non-sexual, and likely sexual ways, every single night at Sirens. Police went to this strip club on a night where Daniels was guest dancing with a very specific target in mind. They were going to arrest Daniels for doing exactly the same thing that happens at that club every night, a fact law enforcement agents happily ignore. I’d be shocked if a few such agents haven’t done a little non-sexual touching of their own while out of uniform.

This blatant hypocrisy is undermining the entire community with not only law enforcement agents but the government itself. The law is stupid, this is true, but the selective enforcement of said law is dangerous. This selective enforcement is why arrests of minorities for minor traffic violations and drug transgressions are much higher than arrests for white people even while statistics show quite clearly there is no such discrepancy in those that commit such crimes.

This is a police force intent on attacking, I do not use that word lightly, targets of their ire and using the law to punish those they don’t like. The Constitution of the United States spends a great many words attempting to ensure this sort of behavior doesn’t occur. The Founding Fathers were subject to such selective enforcement by English agents of the law. They well-understood the dangers it presents and eventually rose up and violently ended such enforcement.

This targeting of someone at odds with the President of the United States is particularly disturbing. Could anyone who speaks out against their local Congressperson be so beset? If you vote against the Senator that wins might you be arrested for some minor legal violation while those who supported the Senator do it with impunity?

This is not as big a stretch as you might imagine. Once it becomes evident to politicians they can use the courts and law enforcement agents to imprison their political enemies the path is clear. Sadly, they don’t see the inevitable conclusion to this trail, they merely realize the immediate gain.

Dictators, even ones who espouse democratic ideals, often find themselves at the wrong end of an angry mob. Mayor Ginther, now you know.

One thought on “Stormy Daniels and Selective Enforcement of the Law”