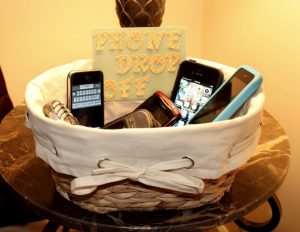 Should people use a Cell Phone Basket during their Thanksgiving Celebration this year? I’m seeing a trend toward this sort of thinking on my various social media platforms. The idea is simple enough, people are talking on their cell phones rather than participating in conversation with those present at the table. The idea of collecting phones using a cell phone basket goes beyond Thanksgiving but the family friendly holiday is certainly a focal point for the concept. Is it a good idea?

I think the majority of people will think it is. I disagree. It’s a concept that strikes directly at the heart of freedom. Some people abuse freedom and in order to stop them from doing so, the do-gooders of the world punish everyone. They are essentially saying: I don’t like it when you talk on your cell phone during dinner. I don’t talk on my cell phone during dinner. I’m going to force you to behave in a way that I think is appropriate. This is not just a problem at the dinner table but among the mainstream thinking of both major political parties. We think we know what is best for you, we think we know how you should behave, and we have no compunction about passing laws and putting pressure on you to conform to our way of thinking.

This mode of thinking is largely associated with Liberalism but I find that so-called Conservatives are just as, or even more, likely to try and force others to conform to their way of thinking. More and more, people think nothing of forcing through coercion, social pressure, or even legal maneuvering to conform to what they think is an appropriate standard.

Your standard is not my standard nor is mine yours. If you want to talk on the cell phone during Thanksgiving dinner, I think you are rude but I have no business forcing you to stop. If I don’t like it, the choices available to me are to leave the table or, should I be the host, not invite you in the future. As a host I think there is nothing wrong with suggesting people keep cell phone use to a minimum but I think it’s absolutely wrong to either force or pressure people to put them in a cell phone basket.

The world we live in today is filled with things very much analogous to a cell phone basket. How I position my body during patriotic songs, who I marry, what chemicals I ingest, what firearm I am allowed to own, if I should or shouldn’t visit the White House, if I talk on my phone during Thanksgiving. It’s just not your business. You certainly don’t have to be my friend. You don’t have to invite me to your events. You can ignore me. You can dislike me. You can even hate me. Don’t try to shame me. Don’t try to coerce me. Don’t try to force me. Ask me politely if you must. Be assured, I’ll do you the same courtesy.