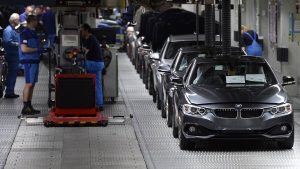 Stoned Assembly Line Workers Cost BMW $1 Million in One Day, Report Claims: Screams the misleading headline from TheDrive. The implication is BMW workers were high on marijuana and made some horrible mistake.

This one’s a doozy. If you read the headline and the first paragraph you’ll assume  the two BMW workers smoked a marijuana joint and then collapsed on the line causing a forty minute shutdown. This costs BMW about a million dollars.

It’s a good thing your trusty sniffer out of misleading headlines, that’s me, is on the case!

In the story we find out that one of the workers was way, way over the legal limit for alcohol and the other was flying on amphetamines. But, heck, let’s blame marijuana! Because it’s reported, but not confirmed, they smoked a joint before heading onto the line. Marijuana is an easy target. Mission accomplished Aaron Brown, you win for the most misleading headline. I sometimes let the author off the hook because the headline is generally written by someone else but Brown is an accomplice in the crime this time. The lead of his story is the marijuana use and, oh, by the way I’ll mention later, they were drunk as skunks and sailing on Crystal Meth.

This sort of thing is journalism at its worst. It’s designed specifically to be consumed by the anti-marijuana people of this world so they can pass it along in Facebook to everyone they know, that’s how I came across the story.

Always read the full story, my friends. Or come to me, because I do!