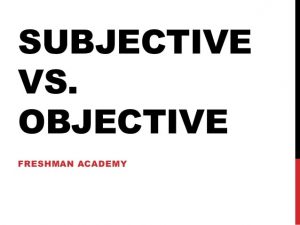 It is my opinion there is a large and important debate going on in the world between those who hold an Objectivist philosophy and those who favor the Subjectivist point of view. One idea, objectivism, is that each problem has a correct path to follow and that an objective person should attempt to find it. The other idea is that there is no real correct path, the decision that I choose is always correct simply because that is what I wanted at the moment. This morning, as I was deciding on breakfast at Whole Foods, I made an interesting realization about these concepts and much of the confusion they engender.

My story goes as follows: Whole Foods generally has two breakfast sandwiches that interest me; a breakfast burrito and a breakfast muffin. Both cost the same amount but one, the burrito, is significantly larger than the other. However, I enjoy the taste of the muffin more. The subjectivist will say there is no right answer. I might choose one today and another tomorrow. The objectivist will suggest that one choice is right for me and the other wrong. The reality is one day I might be hungry or have less money for a later lunch purchase and thus the burrito is the correct choice. Another day I might have more money or be less hungry and the muffin is a wiser decision.

What I think it is critical to understand is that just because I made two different choices on two different days doesn’t make either of my decisions subjective. I analyzed my desires at each moment and made the correct, objective, decision in both cases. The subjectivist will incorrectly argue these events prove their point. The circumstances of the moment changed the resulting choice. They will say there is no “right” answer. All answers are subject to the circumstances and opinions of the moment.

This is where I think most subjectivist go understandably wrong. The decisions, while different, are objectively correct both days. This is the heart of the objectivist position about how to conduct your life. We try to make decisions that are going to best improve our lives taking into account the affect of the decision both in the short and long-term.

It is clear I made two different decisions on subsequent days. It appears the decision itself is completely subjective but it is actually quite objective both days. This is a difficult and fine nuance. A subjectivist believes that it doesn’t matter what I choose on either day, it is the right choice because I made the decision. An objectivist believes there is a correct decision on both days. The difference is illustrated when we imagine a third party weighing our decision.

I’m not particularly hungry, I prefer the taste of the muffin sandwich, I have an early lunch date planned with Emily Ratajkowski, and I decide to have the muffin over the burrito. From a third-party point of view that is clearly the correct decision. This demonstrates the clear delineation between an objective decision and a subjective decision. If I chose the burrito under the circumstances outlined it would have been objectively the wrong decision.

In this case, the wrong decision doesn’t lead to dire results. I’m simply enjoying my breakfast less and, being full, decide to cancel my date with Ratajkowski. On second thought, maybe the results are catastrophic!

This is why I think it’s important to sweep aside the ideas of subjectivism. What is good for me is good for those around me. When, as individuals, we start to make a greater percentage of objectively good decisions, we improve the world around us. The more people who engage in such behavior the better the world becomes. A society filled with people making good decisions rises while one filled with people making bad decisions fails.

It is a numbers game. If 5% of the people in one group are making good, objective decisions, and 10% of the people in a second, relatively equally sized group, are doing the same. The second group will largely be better off. The idea is to give people the foundation of objective, critical thinking, so that all our lives are improved.