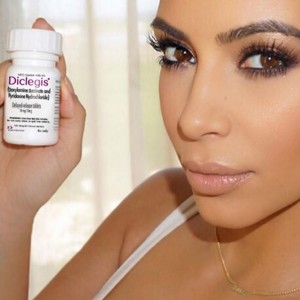 There’s an interesting story about government regulations making the rounds involving Kim Kardashian and a drug called Diclegis. At question is the fact that Kardashian is essentially a paid sponsor for Diclegis through her Tweets, Instagram photos, and Facebook posts.

This sort of sponsorship deal is not new. Companies pay celebrities to mention their product in apparently normal social media interactions.

What’s different in this case is that the Food and Drug Administration (FDA) has laws about advertising products without mention side-effects and other drugs which are dangerous to take with the original drug. In this case Diclegis can often cause drowsiness and it should not be taken with alcohol or other sleep inducing medication. If people take Diclegis and then go out driving, they risk the lives of many other people.

Kardashian does not mention these side-effects or incompatible drugs in her various social media advertisements. The FDA now wants to fine her for these violations.

The FDA was created back in 1938 as knowledge of what was going into food and drugs became more well-known. There were any number of cases where people ingested lethal substances when they thought they were taking medicine or normal food. A particularly loathsome case involved the deaths of thirteen children here in my hometown of St. Louis traced to a tainted diphtheria anti-toxin.

The question for me is complex.

Does the government have constitutional authority to protect people from the food and drugs that manufacturers produce, advertise, and distribute? Clearly, yes. Congress has given them such authority and the constitution does not forbid it.

But do FDA regulations accomplish these things? I think the answer is largely, but not completely, no. We’ve all seen drug commercials that go through an endless litany of possible dreadful side-effects and warnings. Do these warnings prevent people from mixing drugs or driving cars while taking the drug?

We must be responsible for ourselves. We must investigate the drugs we are taking. We must listen to our trained physicians who are prescribing them. If we are not doing so, then that’s our fault. The FDA shouldn’t be able to tell Kardashian to tell all the side-effects of every drug she mentions as part of a paid advertisement.

That being said, I’m not totally opposed to the FDA. I do think they have a useful function in our country. I think the FDA can and should test drugs and food. They should post all the pertinent information on readily available websites for We the People to look at. Then, with the aide of our physicians, we can make informed decisions. If a drug kills people the government can and should arrest those responsible for its distribution. If a physician lies about side-effects to a patient to sell more of a drug then that physician should be prosecuted.

There will always be snake-oil salesmen (see Dr. Oz) who find ways around government regulations. We must always be responsible for ourselves. No amount of regulation will save us if we are not.

One thought on “Kim Kardashian, Diclegis, and the FDA”