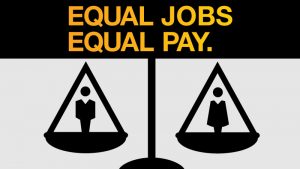 There are a number of cities and states considering legislation barring interviewers from asking you questions about your last or current salary. Some have already implemented it. This is being done in an effort to eliminate gender pay inequality. The basic idea is that women are paid less than men, and this particular question contributes to that problem.

I’m not going to get mired into a discussion about pay equality for women because it’s a complex topic. There are arguments that such inequalities do not exist, and other arguments indicating they do. What I’d like to discuss is if the proposed solution is going to solve the problem, and what sort of ancillary issues it will engender.

The idea is that a woman who is currently being paid less money than her male counterpart won’t have to reveal her salary, and thus an employer will offer her the standard amount given to a man. There are a number of problems with this plan.

A woman doesn’t have to accept a lower salary offer initially. She could easily say no.

If an employer doesn’t have any idea of previous salary, then she or he is probably going to lowball to start off. This could result in exactly the opposite of the desired outcome. The employee might well accept this initial offer.

Such laws are an attempt to protect people from themselves and, as a Libertarian, I’m almost always opposed to legislation of this nature. It is up to the employee to know their value and negotiate for a better salary. When we try to legislate things like this, we create a false sense of security. An employee is under the impression they are protected, when they are not. A potential employee in that situation might well be more vulnerable to being underpaid.

Let’s also take a moment to examine the unintended damage such legislation might cause. Mainly, the employer is less able to judge the potential employee. By understanding the prospect’s current salary, the employer can make various value judgments. The employer might make mistakes in their hiring process without this information. They might hire the wrong person and that can be extremely damaging to a business, particular a small business.

Finally, there is the idea this information is no longer as secret as it once was in this world. There was a time when no one really knew what anyone else was making. People kept that information secret. In this modern world with internet connectivity, people are much more aware of what their counterparts within a business and in similar positions with other companies are earning.

Nowadays, a business is much more likely to post basic salary information with every job opening. The potential employee is far better equipped with information than at any time in the history of the world. This means the part of the problem we are trying to fix, women getting offered a lower salary based on previous remuneration and not knowing it is a lowball offer, doesn’t really exist.

I know my opinion is going to cause certain people to shove me into particular categories and that’s up to them. What I want to be clear about is my feeling on wages. People should be paid based on their work. Sex, religion, disability, and all those other supposed factors don’t have much of a role in salary determination.

In summation, the fix doesn’t really solve the gender pay issue and could potentially cause other problems. Don’t do it.