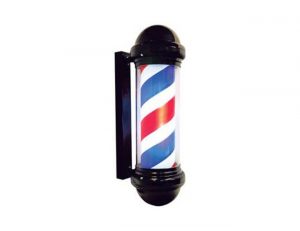 Yep. You read correctly. The New Hampshire Board of Barbering, Cosmetology and Esthetics is on the streets keeping America safe from rogue barber poles. You are only allowed to display the red, white, and blue striped pole if you have a license to be a barber in the state of New Hampshire. Mere cosmetologists, who have their own regulatory rules, do not meet the standard.

This is a microcosm of the government in the United States. We have regulatory boards for virtually every business that exists. In order to practice you must have a state license. The rational given for all of this oversight is that it is needed for your safety. The state must protect you from people who call themselves barbers, but are actually only cosmetologists. It’s the same for massage therapists and your trainer at the gym.

What’s the real reason for all these agencies? For the regulation of barber poles? Money, power, and competition suppression.

The state generates enormous sums of money by charging yearly licensing fees to all these businesses. They use your tax dollars to pay the employees of these agencies. They charge more money forcing people to pass ridiculous tests to prove they can actually perform their jobs.

And then there is the power aspect. There are those charged with enforcing these ludicrous regulations and it tickles their fancy to roam about and issue citations to anyone who dares flaunt the law. They get little badges and ticket books. Their salary is paid for by the very people they harass. I’m sure there are plenty of very reasonable inspectors who don’t enforce the letter of their regulations on anyone who annoys them, but I’m equally certain that many who enjoy harassing citizens. Who among us hasn’t encountered an unreasonable and petty inspector who enjoyed making us squirm?

Finally, there is simply the fact that large and enterprise businesses are much more capable of paying all these fees and abiding by all these regulations. These regulations crush small businesses. They stifle competition for larger companies who have armies of lawyers and deep pocketed lobbyists. These enterprise businesses often end up actually writing the regulations with wording designed specifically to crush competition. They then pay the bills for legislators who in return for this favor, create the laws.

These supposed tests that ensure a practitioner is qualified? I know a little about them as well. I was in the IT industry and I had to pass all sorts of certification tests in order to be qualified to do my job. The way you pass the test is to purchase practice tests. These tests are made by companies who send in fake test takers, who relay the questions to the company, who in turn make a practice test that is pretty much exactly the same as the real test, and then sell it to potential test takers.

Let’s imagine for one crazy moment that we don’t have a Board of Barbering, Cosmetology and Esthetics. Let’s imagine someone becomes a cosmetologist or barber without going through the proper training and certification. Perhaps a barber stabs you in the eye with scissors or scalds your face with a towel that is too hot. Perhaps a cosmetologist uses hair coloring that leaves you bald. These outcomes are terrible to be certain, but do these boards and regulatory committees actually prevent them from happening?

Another important factor is the Information Age in which we find ourselves. If you are an unskilled barber or cosmetologist it will quickly get out. A few bad reviews and your business can be all but ruined. Let the buyer beware has never been truer than it is today. We have so much information at our fingertips, there really isn’t an excuse for ill-informed purchases.