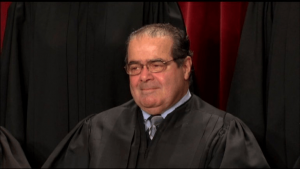 My question is relatively simple. What group of people is eager for the police to take Justice Antonin Scalia’s corpse, move it to the coroner’s office, have it chopped up into bits, the organs removed, tested in every way, and stitched back together again for the funeral?

I’ll not leave you in suspense. It’s “small government Republicans” and it surprises me not a bit.

Who is rightfully against this ridiculous overreach of state power into the lives of citizens? “Big government Democrats” and that surprises me not in the slightest either.

Furthermore I can unequivocally and without hesitation say that should it have been Justice Stephen Breyer who passed away with a Republican president in office the sides would be absolutely reversed.

Justice Scalia had a weak heart and high blood pressure. He was 79 years old. The scene of his death had absolutely no sign of criminal activity.

Justice Scalia, of all people, defended the Constitution of the United States to his death bed. And now those very people who expressed their admiration for his principled stances want his body taken by the state, against the will of his family, and mutilated?

What does this prove? It proves that principles simply do not exist anymore. The ideas our country was founded upon mean nothing. It is political expediency first, second, third, last, and forever.

The police are not allowed to enter our homes or search us without a warrant from a judge and probable cause and yet people think this is acceptable?

No! No! No! I say it thrice. I say it from the hilltops. No! You cannot chop up Justice Scalia. No! You cannot. Damn you, foul evil. Get thyself from my sight and do it right quick.

I have nothing further on this topic.