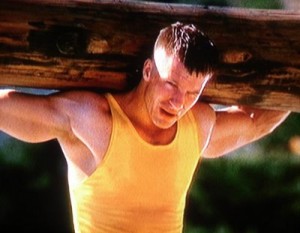 I happened upon a movie I saw long ago and realized it has more to say to me now then when I was a foolish young college student. Not to say I didn’t love the movie then, I did.

Vision Quest is a movie about a young man on a mission. It was filmed in Spokane, Washington in 1983 which was just down the road from where I was attending college at the University of Idaho from 1982 to 1985. So people were pretty hyped up about it. I was a cynical and unhappy person back in those days and I wanted to dislike the movie because all my friends loved it. Even then I came out of the theater realizing it was a good movie, now I realize it is a great movie.

It tells the story of an accomplished young wrestler named Louden Swain, played by Matthew Modine, who wants to wrestle against the reigning state champion from a lower weight class. An already legendary wrestler named Brian Shute. Modine’s character must make-weight to wrestle in the lower class but this is not the driving force of the movie. During the course of the movie he falls in love with a young woman, played by Linda Fiorentino, who is staying with he and his father as she makes her way to San Francisco.

There are a couple of things in this movie that make it a Libertarian story. In the beginning of the film when Modine states his intention to drop a weight class and wrestle against Shute they do not gloss over the fact that this means he must displace the current wrestler at that weight class. This wrestler is played by Michael Schoeffling as Kuch. Here we have the first fantastic message of the movie. Louden defeats Kuch but Kuch does not go off into a corner and weep. He does not plan and plot against Louden. He helps his friend in the quest. He realizes he was defeated and goes about his business like a man. That’s a fantastic message. A message which doesn’t focus on revenge but simply doing the best you can despite any setbacks life throws your way.

The movie, based on a book by Terry Davis, slowly and beautifully shows us that it is Louden’s attempt that makes him a winner. He sees something that will be very difficult and takes the steps necessary to succeed. Will he succeed? Will he fail. In the book we don’t find out because it ends just as the match begins but the movie, of course, had to give us closure. I prefer the book’s ending. It is the journey, the Vision Quest, that makes us better. Not winning or losing.

The greatest and most important point in the movie, from my perspective at least, is when Louden and Kuch go to visit Shute as he is working out. Louden shouts out to Shute who looks up and they engage in a short but astoundingly powerful conversation. Shute asks Louden if he will make weight, thus enabling the match between the two. Louden says he hopes so. Shute replies, “I hope so too.”

That right there is everything I try to convey in all my blogs, in all my novels. “I hope so too.” In most movies Shute would be portrayed as the bad guy. We’d see him hitting his girlfriend or bullying a smaller kid. Not in this movie. In this movie Shute, the bad guy, is looking forward to the tough challenge as much as is Louden. Why? Because he also knows that to be strong you must test yourself against others who are strong. Man, what a scene! That’s the kind of writing I strive to achieve.

That’s a motto to carry forward in life. Welcome the challenges and strive to win but don’t be despondent in defeat. You will live to fight another day, another battle, and you will be the stronger for it. This message that victory is everything corrupts. It is a bad message, a wrong message. Fight hard, fight fair, do your best and you’ll be a winner, even in defeat.