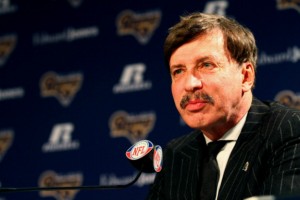 Anyone who reads my blog with any regularity knows I’m from St. Louis, a huge sports fan, and holder of Rams season tickets. The big story around here the last few weeks involves the owner of the Rams being part of a group that is building a new football stadium in Los Angeles.

It’s no secret that the NFL would like to have a team in the largest market in the United States. It’s also no secret that Stan Kroenke is unhappy with the stadium here in St. Louis and is in the middle of negotiations to build a new one. He wants the city to provide much of the money while the city would prefer he funded the effort.

The implicit threat is that if Kroenke doesn’t get his way he will move the Rams to Los Angeles. There’s nothing new going on here. Mr. Kroenke has been playing this game with the city of St. Louis and the state of Missouri since he purchased controlling interest in the team back in 2010.

What I want to talk about today is a recent news story that’s been making the rounds. Since the announcement of the stadium plan in L.A. there has been a lot of hand-wringing here in St. Louis. State and city leaders joined the fray when they announced to the press that Mr. Kroenke wasn’t returning their calls and they were taking their case directly to the NFL.

Let me preface my comments by saying I’m a huge Rams fan. I love the team and think they are on their way back to the elite in the NFL. Maybe I’m delusional but I want the team to stay in St. Louis so I can cheer them onto to their next Super Bowl victory. I am rooting for the community leaders and Mr. Kroenke to work out a plan. That being said ….

Boo hoo, Mr. Governor, Mr. House Majority Leader, Mr. Mayor. When you encouraged Mr. Kroenke to purchase majority ownership of the Rams you invited a tough businessman to the table. When you’ve got a man like Mr. Kroenke opposite you it’s time to put on your big-boy pants. I’m of the opinion that Mr. Kroenke would like to keep the team here in Missouri. It’s his home state. His family is from here and many of his friends. Mr. Kroenke doesn’t let that change his game face.

What’s the biggest card in the deck for those who want to pressure Mr. Kroenke to stay? Hey, Stan, there ain’t no stadium in L.A. so your threats to move don’t scare me. Well, boys, Mr. Kroenke comes to play.

He’s not returning your calls? Then stop calling him.

Going behind his back to the NFL to plead with them not only doesn’t make you look strong but I also think it’s a stupid play. The NFL cares a lot more about keeping Mr. Kroenke happy, he’s the second or third wealthiest owner in the league, than it does about any Missouri politicians or a fan like me. I doubt seriously Mr. Kroenke would have gone ahead with this L.A. stadium plan if he didn’t have solid backing from the other owners about bringing a team to L.A. whether it be the Rams or someone else.

What Mr. Kroenke did was take away a chip from his opponents and potentially make a lucrative deal to lease the new stadium to whatever team moves there even if he gets the stadium he wants in St. Louis. Tough, good, business. I’ll tell you this, I wouldn’t want to be on the other side of the negotiation table from Mr. Kroenke. And if I found myself in that position I’d certainly be making my plans with great care. Not whining about how he won’t answer the phone.

You want the team to stay in St. Louis. Hammer something out. Don’t give away the farm, because Mr. Kroenke won’t respect that either. There’s money to be made by everyone when it comes to the NFL. No doubt there’s more money in L.A. than St. Louis but L.A. has failed to support a team before. There are dangers in the move. There is stiff competition from the City by the Bay, Alameda County, and down Route 1.

Don’t whine, don’t run to the press, don’t look to the NFL to save you. Figure out a plan that can work for the city, the state, and for Mr. Kroenke. Give his executive assistant a call and invite him to a dinner next Thursday at Tony’s. Call ahead and make sure Vince is there to make Bananas Foster table-side for dessert. A round of Booker’s bourbon, with a splash of water of course, might not hurt negotiations either.