United States Attorney General William Barr dropped all charges against General Salvador Cienfuegos who, among other things, informed Mexican Drug Cartels who was an inside informant resulting in the murder of said person. Why did William Barr do this, well, he claims it’s because Mexico wants to charge Cienfuegos, but the real reason is to make sure that Mexican authorities continue to cooperate with the US in drug interdiction.

Let’s be clear, the United States has many, many Mexican nationals in our prisons related to drug crimes. What makes Cienfuegos special is that he has friends in high places and our completely corrupt government is happy to do them a favor.

In continuing to be clear, Cienfuegos is responsible for far more of the drug trafficking coming into the United States than a thousand low-level drug dealers. Our willingness to lock up a person selling drugs on the corner while ignoring the entire top of the supply chain is a damning indictment of those who bleat earnestly about the dangers of drugs in the United States.

I’m against the War on Drugs for any number of reasons. I don’t think we should be prosecuting this war and I think the interdiction effort has caused more harm to the citizens of the United States than any other policy of government in the history of the country.

However, if you are for the War on Drugs, if you believe this scourge must be stopped, then you should be calling for Barr to be hanged by his neck until dead, I won’t hold my breath. The reason you won’t is because you are not really invested in ending the War on Drugs. This war fills the pockets of not only Cienfuegos but law enforcement agencies throughout this country. We are completely corrupted by the money and Barr’s head is deeply in the trough.

The government takes your tax dollars by the billion and redistributes this wealth to law enforcement agencies across the country. This money is the primary way the Attorney General of the United States controls law enforcement. It is the way government bribes local officials into doing their bidding.

When Barr claims Cienfuegos will be tried and imprisoned in his own country, he is taking part in the grand deception. When Barr funnels money to law enforcement to war on drugs, they purchase equipment that allows them to crush freedom across the country, from Lafayette Square to Malheur National Wildlife Refuge. 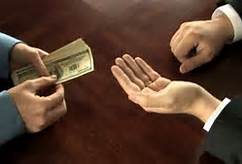 The appearance of impropriety is when something looks wrong even though there is no proof of wrong-doing. A story I read in the back pages made me start to think about this phrase.

You often hear it quoted in its negative, “We must avoid even the appearance of impropriety.”

The story I read was about how U.S. lawmakers are once again taking family vacations, er fact-finding missions, all over the world as guests of generous lobbyists. This practice was curtailed in 2006 after the Jack Abramoff scandal. By curtailed I mean lobbyists could only pay for trips that lasted one week instead of two-weeks out of the country and four days instead of one week inside the U.S.

We must remember that politicians are largely funded by special interest groups and the lobbyist they have on staff. Politicians cannot win the primary or general elections without such support. Once in power they continue to take money from wealthy people and groups who have particular political agendas. There are rules about how much and what the money is spent on, but these are easily circumvented by creative lawmakers and lobbyists who want their votes.

Politicians regularly take exotic trips, go to sporting events, funnel money to friends and family members, and use their legislative power to help those who provide this largess.

The same politicians argue that they still vote their conscience, that they don’t let such influence peddling effect their decisions. That these vacations are valuable cultural exchanges. If you believe this, if you spew this nonsense yourself, then I have nothing to say to you. You might as well stop reading now.

It’s so ingrained, so institutionalized, that there is no possible way for a Democrat or Republican to get elected without being the beneficiary of such gifts. If they refuse they magically lose their funding, the support of their national party, and any chance of being elected. The only candidates to vote for are those already corrupted. Any politician who goes into it with idealistic dreams doesn’t last long. Only jaded, corrupt, bad characters need apply.

When we “toss out” a corporate bought Republican we get a union bought Democrat. No progress there.

There is a solution. Anyone who reads my blog with regularity knows it. Vote Independent. Vote Libertarian.

Don’t believe me? Keep voting for Democrats or Republicans. See what happens.

The appearance of impropriety? Ha.

Tom Liberman
Sword and Sorcery fantasy with a Libertarian Ideology
Current Release: The Sword of Water ($2.99 full length eNovel)
Next Release: The Spear of the Hunt