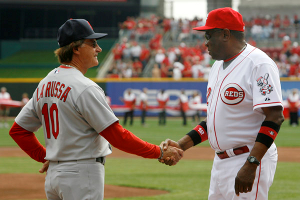 The feud between Dusty Baker and whatever team he manages and Tony LaRussa and the St. Louis Cardinals reached new levels of animosity when Baker accused LaRussa of leaving several Cincinnati Reds players off the All-Star team because of previous incidents having nothing to do with baseball.

I’ve got a take on it I haven’t heard yet from the various factions but first lets cover the dispute.

The two managers have a long-standing feud from their many year association with one another. There was an ugly brawl between the two teams in which one of the principles involved kicked backup catcher Jason LaRue in the head and ended his career and also spiked ace starter Chris Carpenter in the back leaving long scratch marks.

Baker and Johnny Cueto blame the brawl for LaRussa leaving both Cueto and second baseman Brandon Phillips off the team. The brawl was precipitated by Phillips calling the Cardinals players “little bitches” and saying that he hated them. The next time the two teams met Phillips tapped catcher Yadier Molina’s shin guard with his bat in a friendly greeting. Molina took exception and the brawl began.

LaRussa argues that Phillips and Cueto were in the mix but both were left off for reason unrelated to the brawl. Cueto was scheduled to pitch the Sunday before the All-Star game and thus unlikely to be able to pitch more than an inning in the actual game. Phillips has good numbers but was not voted in as the top second baseman and the presence of another second baseman based on fan votes precluded a third second baseman being on the roster.

Baker, Cueto, Joey Votto and other Red’s players, Phillips has remained silent on the subject, believe the players should be chosen simply based on their play on the field.

The manager should pick players he thinks are best for the team and no one else has any say. Anyone who claims they have more say than the manager is dead wrong. If LaRussa hates Cueto for ending the career of his backup catcher then he should leave him off the roster. It’s LaRussa’s decision. He’s the manager. LaRussa doesn’t need to claim that Cueto was pitching on Sunday. He could just say, “Cueto’s a punk. I hate him. I don’t want him on my team. Screw him,” and I would say fine. Just as if Dusty Baker and the Reds win the World Series this year then next year Baker could choose to leave off any Cardinal he wanted. He’s the manager!

LaRussa could say to Phillips, “Who’s the little bitch now,” and I wouldn’t care. Baker could say, “Molina is a punk and I’ll never select him to my team.” It’s the managers decision.

In all fairness I’m from St. Louis and Cueto’s kicking of Carpenter and LaRue bothers me to this day. He’s a nasty piece of work but a good pitcher. Still, if this went the other way I’d be consistent. It’s the manager’s decision. Final. Done.