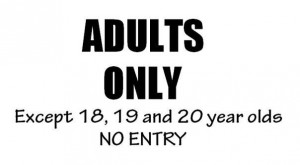 Once a month we have a company happy hour after work at the tavern downstairs in our building. We drink a few drinks, sing a few songs, eat some pizza, and have a nice time. The owner of the company often brings his eight year old daughter because she likes the pizza.

I just arrived home after said event. Sadly Sophia was unable to enjoy her pizza tonight. My boss and his daughter were removed for the premises. Apparently she’s too young to be in a bar. Yeah, I’m angry. Yeah, we’re not having our happy hour there next month.

I’m of the opinion this incident gives us great insight into why laws generally fail to accomplish their purpose.

Let me say up front that I don’t blame the bar. I blame government. I think the bar was probably under pressure because they had underage drinkers in the past. They had most likely been warned or even fined for allowing underage drinking.

I also don’t want to talk about the general stupidity of drinking laws. I’m going to focus on the abject idiocy of what happened tonight.

Tonight a father and his eight year old daughter were prevented from doing something they loved because the government thinks it knows better than the parent. That’s the long and the short of it and it if doesn’t disgust you, well, there’s something wrong with you.

Let’s imagine minimum age drinking laws make sense (they don’t, but allow the fantasy for the moment). There was no chance Sophia was going to sneak up to the bar and trick the lovely, and I do mean lovely, bartender into making her an Old Fashioned. If my boss wanted to allow her a sip of his drink then he could easily and legally do so at home.

I ask you this question. Who was protected by what happened tonight? Who?

The answer is obvious, no one. No one! A law that protects no one and prevents a father and daughter from enjoying a fun evening together cannot be anything other than evil. Yes, evil. I’ve gone there. Sophia looks forward to this happy hour. She loves spending time with her parents and the other member of our company. She was denied enjoyment. Her parents were denied enjoyment. Most importantly, I was denied the pleasure of my boss, his wife, and Sophia this evening.

The ridiculous application of a law caused suffering. Again, let’s imagine the government has a vested interest in keeping nineteen year olds from drinking. At what point aren’t you allowed to use a little self-discretion? A little judgment? Sophia was not going to be drinking. She was not going to be getting drunk. She wasn’t going to fool anyone into serving her.

I understand people will say that yes, Sophia was hurt, but we must protect the nineteen year olds from the danger of drinking at a bar. That we must have laws. That the laws must be enforced.

I disagree. I think any law that isn’t flexible enough and thus causes absurd enforcement should not be a law at all. What do you think?

One thought on “Kicked Out of a Bar for Being Eight”