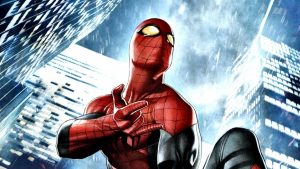 One of my favorite superheroes, Spider-man, is getting another movie released this summer and the trailers have a few fans up in arms. It seems young Peter Parker has a fancy spider suit with all sorts of gadgets, provided to him by Iron Man, Tony Stark. This is causing much dismay in the Spider-Man fan community and I think it’s an interesting situation.

Spider-Man appeals to me, and I suppose others, for obvious reasons. I’m a rather small and anti-social lad, much like Peter Parker. Unlike me, Parker gets his powers after being bitten by a radioactive spider. He is very unlike Iron Man. This hero is buoyed by millions of dollars, a genius intellect, and a fantastical costume which can perform wonders. Spider-Man has only the abilities provided to him by the spider bite. Super strength and agility, the ability to cling to walls, a spider-sense that warns him of danger, and fast healing abilities. Initially he used mechanical webcasters but the spider bite eventually allowed him to manufacturer and fire webs organically.

In the new movie, it is apparent he has an enhanced spider suit that can do all sorts of things including deploying a parachute. As a side note, falling from great heights was one of the things that proved quite dangerous to Parker over his years of crime fighting, so the parachute makes sense from a practical standpoint. Many of the features of the new spider suit seem to be designed to make up for the weaknesses inherent in the Spider-Man character.

All this is pretty much explanation as to why people are upset about the apparent powers of the new spider suit. It’s just not traditional for the character of Spider-Man. Spider-Man has weaknesses, he is not Batman, Iron Man or Superman. He is Peter Parker, a sweet young man who becomes a crime fighter because of an accident. The death of his first love, Gwen Stacy, resulted from the fact he wasn’t as super as other heroes. This costuming strikes people as a betrayal of the very nature of Spider-Man. A coarse commercialization in trying to create a connection between Iron Man and Spider-Man. It hurts. I agree with those complaining but with a caveat.

I’m not running a motion picture studio. I like Spider-Man because some little nerdy part of my brain thinks maybe I could be like him. I’m not trying to make a movie that appeals to the maximum number of people and generates revenue to keep my business up and running.
Columbia Pictures and Marvel Studios are in a business and that business requires making money. A number of super hero movies failed horribly at a financial cost. They have a vested interest in making money, not having Spider-Man conform to what a few geeky fan-boys, that’s me, believe the webcaster should be.

One thought on “Does Spider-Man Need a Super Spider Suit?”