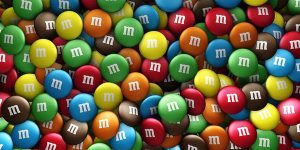 I just read an absolutely fascinating article about Mars Candy. It states that Mars is looking to reduce the presence of their world famous M&M Brand candy in third party products like McDonald’s McFlurry because of concerns that people are eating too much sugar.

It’s why they are doing this that makes this Libertarian beam with happiness. You see, Mars is a privately held company. They are not beholden to stock holders. The reduction of sugar is not being done because the government is forcing them to do it. They are doing it because they are concerned about their customers, as well they should be.

Mars has a history of this behavior so it’s not a one time publicity stunt. Mars was the first candy company to put sugar amounts and calories on the packaging of their product. Not because the government told them to do it but because they wanted their customers to be aware of how much sugar they were consuming!

In 2013 Mars voluntarily removed “King Sized” candy bars from their product lines and limited the amount of calories to any single bar at 250. Again, not because any politician made them do it. Because they are concerned their customers are eating too much sugar and adversely effecting their health. From a candy company!

These sorts of moves cannot be easy for a company like Mars to consider. Too often we look at short term economic strategies. Mars wants their candy loving customers to live longer and buy more product during that lifetime! They have a long-term strategy that is not only good for the company but good for their customers, which makes complete sense.

Mars advises customers to consume their products modestly and as a treat!

Mars has promised to match health guidelines for sugar intake by limiting sugar in their products.

By golly, three hearty huzzahs for Victoria Mars and those who work for her company!

I urge all my friends to go out and buy some Mars candy remembering to consume it as an occasional treat. Live long, my friends.