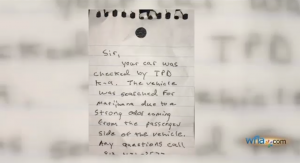 There’s an amazing case making the news in Tampa, Florida where the police searched a parked vehicle because they smelled the odor of marijuana coming from it. At least they so claimed.

The truck in question belongs to Matthew Heller and is painted with the logo of his business. In their search of his car they tore out panels and did significant damage to his electrical system. They left a hand-written note on the truck telling him to call the police department if he had any questions. Are you kidding me? This was the guy’s business vehicle. There is no way the officers who performed the search could not have identified Heller and tried to contact him but that’s not even the most egregious violation.

The Tampa police claim the search was perfectly legal and have so far refused to pay for the damage they caused although it seems obvious to me that they will have to do so eventually.

I’ve written on a number of occasions about the War on Drugs and the seizures laws and I have no doubt that if they had found even trace amounts of drugs they would have seized his car and everything in it. The fact that an officer can simply claim to have smelled marijuana in a car that was parked in a parking lot at a concert, break in, and search it should give everyone pause for alarm.

This is the police state that the Founding Fathers lived under when we were a colony of England. This is why we have the Fourth Amendment. This Amendment protects me from a vindictive police force bent on destroying me.

The War on Drugs has provided such a bounty of money to law enforcement agencies over this entire country that local municipalities no longer use enough tax dollars to support the agency. This means the police are becoming more and more dependent on seizures to fund their operations. They become creative in their methods of getting revenue. I’m of the strong suspicion that the police simply wanted to steal Heller’s truck so they could sell it at an impound auction. That there was likely no smell of marijuana at all. That they troll parking lots of concerts looking for vehicles to steal … I mean impound.

This is madness. This is not good for citizens and it’s horrible for the police. When officers become not the protectors or our people but their enemy this country is in serious danger. The liberties we enjoy are in jeopardy. I’m sure the vast majority of police officers would much rather spend their time investigating and preventing real crime rather than trolling for funds. This sort of thing must make good officers sick to their stomach.

I still can’t get ever the hand-written note I’ve used as the image on this post. Are you kidding me? What is happening to our nation?

Are we so frightened that we’re willing to trade all our liberties for the illusion of safety?

Tom Liberman
Sword and Sorcery Fantasy with a Libertarian Ideology
Purchase The Broken Throne today!
See All my Books