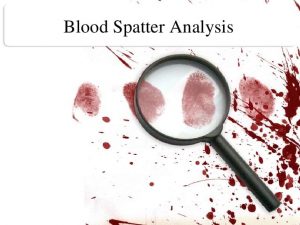 If you’re a fan of crime drama then you’ve almost certainly heard of Blood Spatter Analysis. It’s a technique used to determine how a crime happened. It doesn’t work. That’s very clear. The experts testifying about it generally know nothing of Fluid Dynamics or Physics and earn a certification after a forty-hour course. Yet, it’s an accepted science in almost every part of the United States. Lovely.

I just read an amazing article about how all of this came to be. Basically, one fellow invented the so-called science in his basement and was convincing in the courtroom despite having no scientifically backed evidence to back it. Now a horde of experts, almost all of whom trained with and were certified by him at his forty-hour course are testifying against one another in cases across the country. It’s not hard to find someone who will testify a blood spatter is evidence of absolute guilt while another person from the same discipline argues for complete innocence.

People’s blood is different in consistency and even different throughout the body. Weather can play an enormous role in fluid dynamics. Gravity plays a part. The setting on the air conditioner will make a difference in how blood behaves in various circumstances. There is good reason no readily repeatable experimentation on blood spatters exists. Yet, the testimony has resulted in any number of people being exonerated or convicted.

There is currently an effort by scientists with strong backgrounds in fluid dynamics and physics to try and make this actually work but the problems persist. It’s largely a field mired in confirmation bias. The result you want to get is the one you get. There just isn’t enough consistency in results to come to reliable conclusions.

There is a lot of sad in all of this. But, being the Libertarian that I am, I’m going to reserve my outrage mostly for myself. Why didn’t I realize this entire methodology is bunk? There is nothing in the article that I couldn’t have figured out simply by thinking about it for a bit. Obviously, blood splatters are going to have huge inconsistences based on wind, temperature, pressure, blood thickness, angles, and who knows what else.

Yet I ate it up on crime shows and assumed it was based on scientific principles all this time. Bad Tom! Do better.